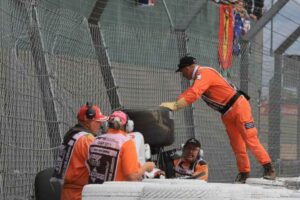 On the run to the first corner of the British Grand Prix, Zhou’s Alfa Romeo was clipped by George Russell’s Mercedes, causing his car to turn upside down and skate through the gravel in a spinning motion before vaulting the tyre barrier and hitting the catch fencing floor first.

News of the Chinese racer’s condition was worryingly slow to emerge, but miraculously he was stretchered away from the car with no injuries and was later pictured talking to F1 CEO Stefano Domenicali in the paddock.

But an incident like that – the most horrifying in Formula 1 since Romain Grosjean’s Bahrain fireball crash in November 2020 – is sure to spark an investigation, with Zhou having credited the Halo device with saving his life.

Palmer, speaking to Formula 1, thinks the FIA will look to see if further improvements can be made – while acknowledging the current measures should be lauded for preventing serious injury, at the very least, to Zhou.

“Really amazing and again it’s a testament to safety in Formula 1 that you can have that accident,” said the ex-Renault driver.

“Actually, as it happened, I saw the red flag was flown straight away and you didn’t realise the extent of it until you saw actually the car had flipped over the barrier, which was incredible to see. It’s not very often that happens.”

Video footage taken from the grandstands has shown spectators scurrying away as the Alfa Romeo hurtled towards them, separated by only the catch fencing and the base of the stand itself.

“It’s pretty rare, but I would say the debris fencing did an amazing job to keep that car away from the crowd, in the confines of the circuit still, and thankfully Zhou is okay,” added Palmer.

“It was a big impact but with every big crash that happens we learn about it – the Grosjean one there have been changes, there may be changes again now, maybe with…I don’t know what will happen, but I’m sure it will be investigated.”

Remarkably, Zhou has every intention of taking his place in the Alfa Romeo at the Austrian Grand Prix this coming weekend, having been in good form before his crash and qualifying an impressive ninth at Silverstone.

“Thank you for all the kind messages,” tweeted the 23-year-old on Monday.

“I want to thank the marshals and the medical team at Silverstone, they were really fantastic.

“I’m keener than ever to get back on track, see you guys in Austria!”