Much like a lot of the automotive world, motorsports is male dominated. There are few women in racing, and we’re unfortunately nowhere close to gender parity. Which is why Katherine Legge competing in the 2019 Rolex 24 at Daytona with a team made entirely of women drivers was remarkable. She’s doing the same this year, and we caught up with her while she was in New York promoting this weekend’s race.

Last year, Legge ran Daytona with co-drivers Christina Nielsen, Bia Figueiredo, and Simona de Silvestra in an Acura NSX GT3. This year, Legge and Nielsen have joined GEAR Racing (the name stands for Girl Empowerment Around Racing), which teamed up with Austrian team Grasser to field a Lamborghini Huracan GT3 in the WeatherTech SportsCar championship. Joining them for Daytona are drivers Tatiana Calderón and Rahel Frey.

With painful awareness that it’s the most obvious question, we asked Legge how it felt to race with a team made up of only women.

“I’d always been the only one. Not necessarily even the only one on the team, but the only one in the paddock,” Legge said. She’d raced against Figueiredo and de Silvestra at the Indy 500, and against Nielsen in sports cars, but she wasn’t super close with any of them. But when the idea for an all-women team came up in 2019, Legge knew she wanted to work with the three. 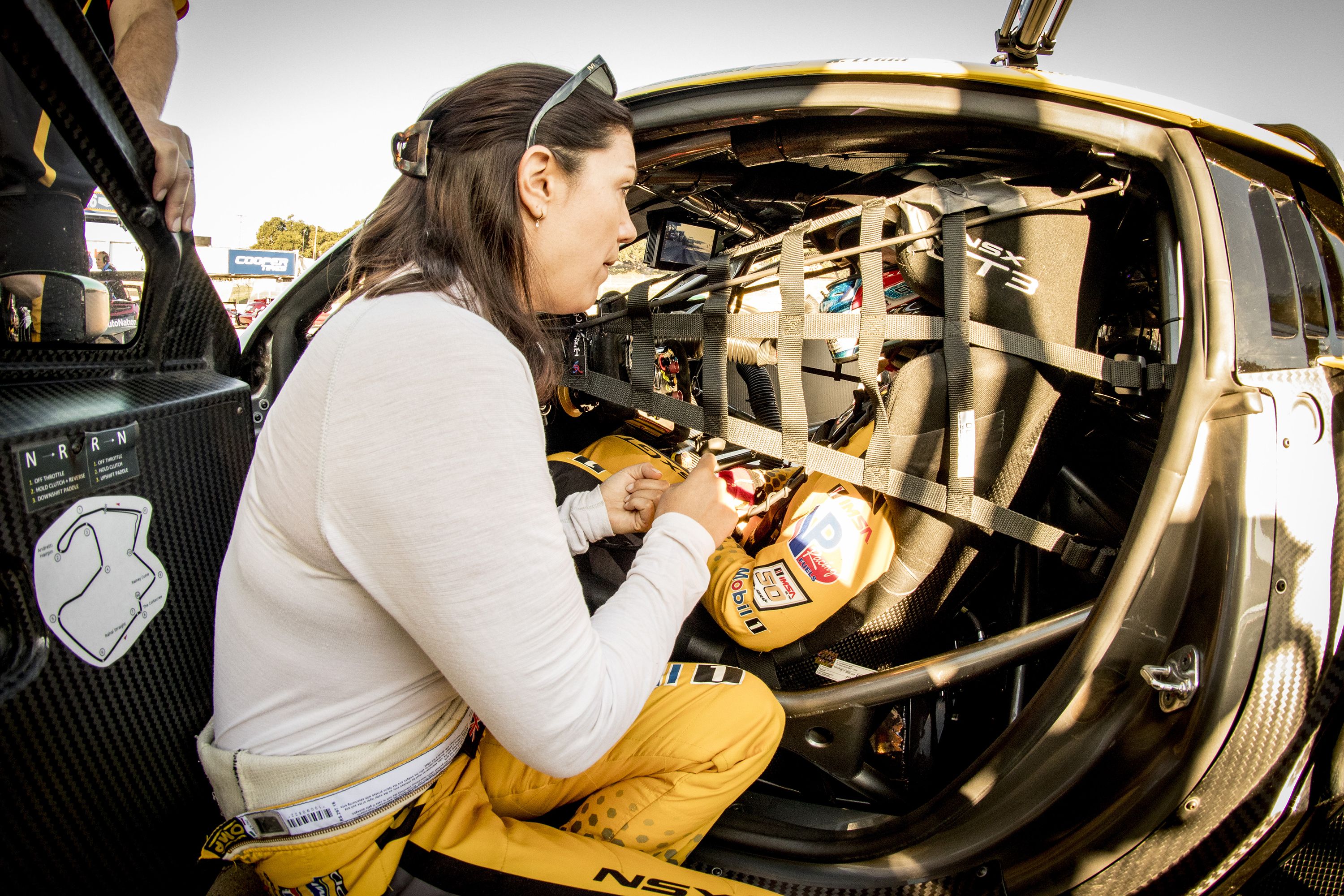 Legge remembers wondering how it would all work. “You’re used to behaving like one of the guy racers, and now you’ve got the four girls together and these are four of the only people in the world who have the same life experience that you have, and see it from your perspective,” she said. “So, it was actually really cool. We all got on really well.” So far, this year has been even better, Legge said. She’s gotten closer with Nielsen, having raced an entire season with her, and describes Calderón and Frey as “uber-professional.”

We also took time to reflect more broadly on women in racing.

“I get the question ‘What’s it like?’ a lot, and I don’t know what it’s like to be a guy driver, so I don’t have anything to compare it against” Legge said. “I know what it’s like to be seen more as just a driver when it’s just one of you, and you just fit in, and try and blend in. It’s easier than when there’s four of you and it’s a bit more shocking to the rest of the world, I suppose. It’s also tricky because each one of us individually has fought a whole career to be taken seriously as race car drivers. We’ve been saying, ‘We’re no different, we can do the job.'”

Running a team of all women drivers makes that message more complex. “Now we’re all together, we’re making a statement, and it’s … hard to say, ‘We’re no different, we’re just showcasing what we can do.’ It’s a fine line to being like, ‘But you are different.’

“Hopefully in the future, there will be men and women, there’ll be men’s teams, women’s teams, mixed teams, everything, and it won’t even be an issue,” she said. “But that’s not going to happen in my lifetime.”

I asked what the men in motorsport could do better, to facilitate more women joining the field. The problem, as Legge sees it, is that it’s just easier for team owners to employ male drivers. “There aren’t many women in racing, and there aren’t many women who are competitive in racing,” she said. And she pointed out that teams often worry about silly things when faced with the idea of hiring a woman driver: “Where are they going to change? What if they fancy one of the mechanics?”'”

There needs to be an influx of female driving talent to make hiring women easier for team owners, Legge said. But right now, hiring a female driver can be good for marketing—”I’m here talking to you today. If I was Kevin Legge, maybe it’d be different,” she pointed out with a laugh. “I’ve come to the conclusion over the years that [my gender] is going against me for sure in a lot of situations, but it’s also going for me. I think it balances itself out.” 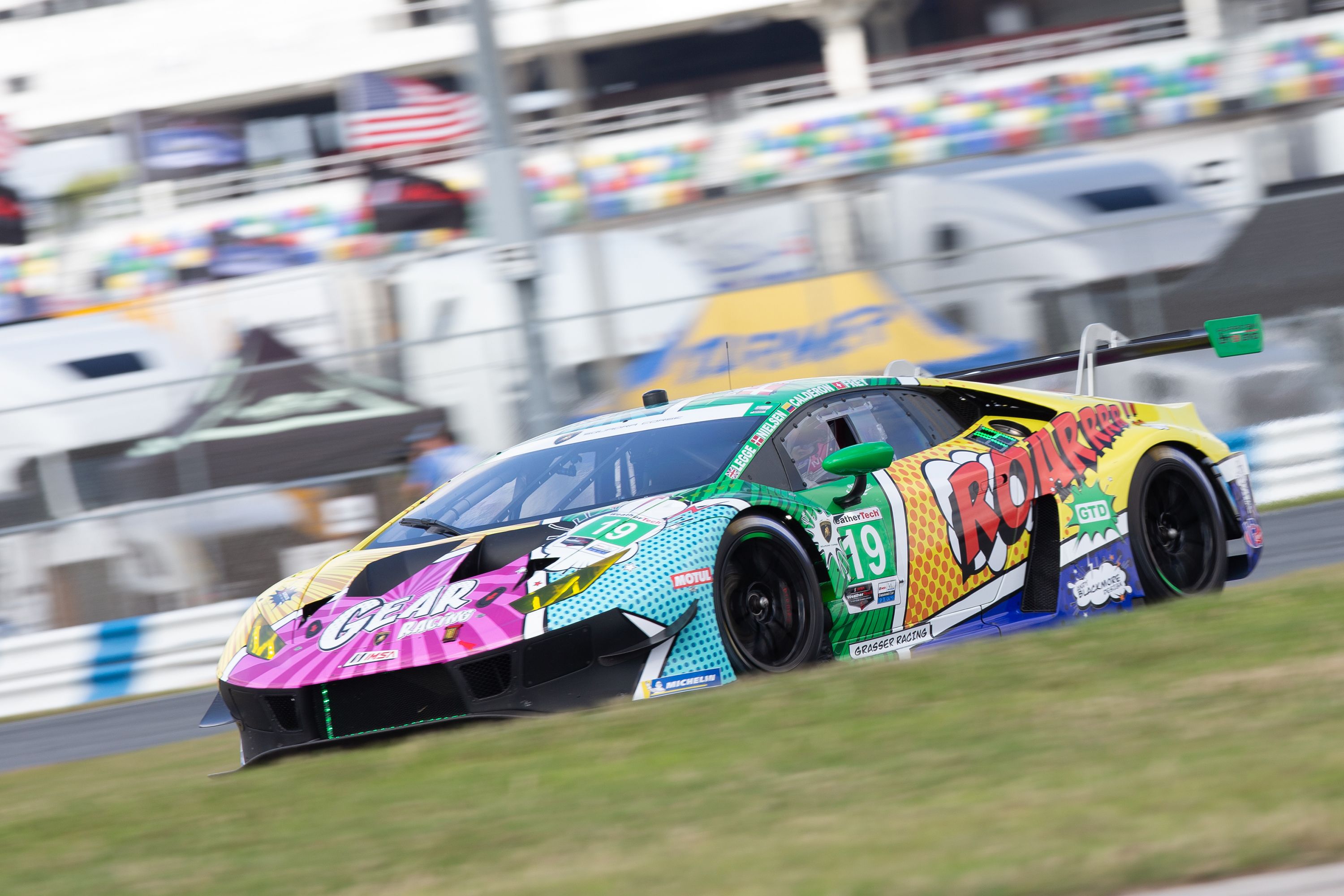 There’s also the problem of dealing with people’s long-held beliefs about gender roles. “My dad is my biggest supporter and believer, but I don’t think even he thought it was possible that I would have such a long career, and do what I’ve done,” she said. “Nobody else had done it before. It’s not that he thought it wasn’t possible. It hadn’t been done. I think the more people that you see doing it, the more it will become the norm and then it will be less of a gimmick, I suppose.”

You can watch Legge and her team, driving their amazing pop-art Lamborghini, competing in the Rolex 24 at Daytona this Saturday starting at 1:30 PM eastern on NBC (the full broadcast schedule can be found here). And for more on GEAR Racing, check out Racer’s interview with Legge.