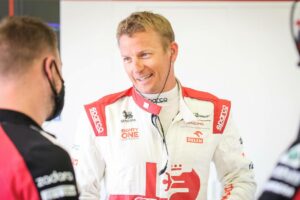 41-year-old Kimi Raikkonen has confirmed that he’s to retire from Formula 1 at the end of the 2021 season.

With 344 race entries to his name across 20 years, the Finn is the most experienced F1 driver of all time, and given that, when he’ll finally call it a day has been a question asked throughout the sport in recent years.

We now have an answer, with the Alfa Romeo man announcing on his Instagram that he’s going to leave the grid for good once this campaign has reached its end.

“This is it. This will be my last season in Formula 1,” he said.

“This is a decision I did during last winter. It was not an easy decision but after this season it is time for new things.

“Even though the season is still on, I want to thank my family, all my teams, everyone involved in my racing career and especially all of you great fans that have been rooting for me all this time.

“Formula 1 might come to an end for me but there is a lot more in life that I want to experience and enjoy. See you around after all of this! Sincerely Kimi.”

Truly the end of an era for our sport. Thank you for everything, F1 won't be the same without you. Kiitos, Kimi. 💙🤍 https://t.co/aY9RB2gYdm

The Iceman will go down in history as one of the sport’s greats having won one World Championship, 21 races and standing on the podium a total of 103 times.

His sole title triumph came in 2007 with him narrowly beating the McLaren duo of Lewis Hamilton and Fernando Alonso in a battle that went down to the final day.

After two more seasons with Ferrari, he then left the sport before returning in 2012, driving for Lotus-Renault and hugely impressing on a number of occasions.

The Finn then returned to the Scuderia in 2014, staying there for five years – winning one race – before signing for Alfa Romeo.

His decision to retire looks set to trigger a chain of events that will shake up the grid hugely, with Valtteri Bottas reportedly set to replace him at Alfa Romeo, making way for George Russell to take his Mercedes seat.

If reports are correct, Williams will then bring former Red Bull driver Alex Albon back to the grid, putting him alongside Nicholas Latifi in place of Russell.