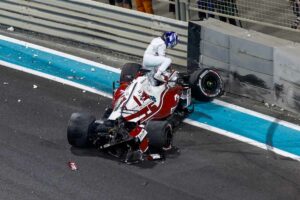 Kimi Raikkonen questioned why some of the layout adjustments to Yas Marina have been made, as he feels a big overtaking opportunity has been taken away.

The retiring Finn crashed out at the end of FP2 on Friday at Turn 14 when his Alfa Romeo hit the barrier on the outside of the track, sending it into a spin and causing widespread damage to be repaired overnight.

He emerged unscathed, and he was quick to play down any worries surrounding the crash.

“I just lost the rear and unfortunately there was not much space and went in the wall but those things happen,” Raikkonen said after the session, per the official Formula 1 website.

“I struggled a bit here and there for different reasons, but it was just a normal Friday and we were trying things to see what happens.”

An incident for Kimi brings out the red flag and the session is called. He is ok and out of the car.

The reviews for the new track configuration in Abu Dhabi have been generally positive among the drivers, with a few exceptions – Raikkonen being one of them.

Gone are two of the chicanes at the circuit, one of which being the former left-right-left combination at the end of the back straight. This has been replaced by a banked left-hander, and the 2007 World Champion thinks this adjustment will end up having a negative impact on the quality of racing on Sunday.

“They took one of the good overtaking opportunities in [Turn] 9 away,” he said. “It’s good to have a change but they should have a slower corner because when it is a faster corner, it is very difficult to overtake.

“Sometimes, you wonder what they think when they do the changes but it’s what it is, it is different.”

On the other side of the garage, Antonio Giovinazzi is also in his final race for the team. He said he doesn’t feel that his chapter in Formula 1 is over completely, and hopes to get back into it in 2023 after a year in Formula E.

In the present moment, though, he went the opposite way to his team-mate in that he enjoyed the changes made to the track in Abu Dhabi, feeling that he had a positive day on the start of his final weekend as an Alfa Romeo driver.

“It was more fun, I would say,” said the Italian. “Faster, so for this car for sure it’s better. I don’t know how good we’ll be for the race, how [much] better we’ll be, so we’ll see on Sunday.

“I think it was a positive day today. We are there really close and all together again [with other teams], so we’ll work really hard tonight to still find some tenths for tomorrow.”