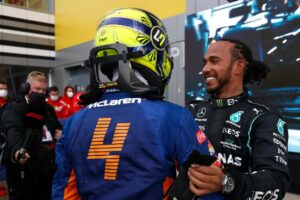 Rival drivers offered Lando Norris consoling words for his Sochi near miss – but he says those from Lewis Hamilton meant the most.

Norris was potentially only a few laps away from a first Formula 1 success in the Russian Grand Prix when a rain shower proved to be a game-changer.

Choosing to stay out on slicks, the McLaren driver struggled to keep control of his car as Hamilton, who had been chasing him down for the victory, pitted for intermediate tyres.

It was the right move from Mercedes as Hamilton, with much greater grip, rapidly regained the ground he had lost by stopping and easily got past Norris to secure his 100th Formula 1 race success.

Although Norris did eventually visit the pits, the damage had long since been done and he agonisingly finished seventh when a fifth podium of the season at the very least had looked certain before the downpour.

Appearing on ITV’s This Morning along with a model of his MCL35M, Norris said he had received words of encouragement from other drivers after his Sochi heartbreak – and none had resonated more than Hamilton’s.

“Coming from Lewis, who was the guy I watched growing up, to hear what he had to say because he’s been through many scenarios, probably even worse in some cases,” said Norris about the support he had been given by his rivals.

“I guess in my way it feels worse because it’s that first win that you just really want to get.

“Many drivers said I did a good job and my time will come. But when it’s someone you’ve looked up to and you know has been through it, it definitely means that bit more.”

Hamilton and Norris had stood alongside each other in the media pen at Sochi, punctuating the respective interviews they were carrying out by discussing between them the events in the closing stages of the race.

“Lando is doing an incredible job and it’s great to see McLaren doing so well and being so strong,” said Hamilton while Norris was within earshot.

The seven-time World Champion later added: “He’s so young, he’s got so many wins ahead of him. He’s doing a great job leading that team.

“It could have played out any way, but I think our team did a great job in terms of understanding where the rain was coming and it was going to get worse.”