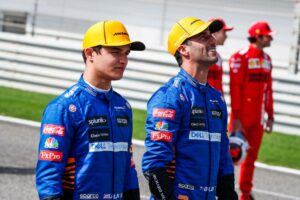 Johnny Herbert believes Lando Norris is right to take a “cut-throat” attitude towards his partnership with Daniel Ricciardo at McLaren.

One of the most popular Formula 1 drivers, Norris has built up a nice-guy persona since his arrival in Formula 1 as a 19-year-old.

He established a ‘bromance’ with his first team-mate, Carlos Sainz, which has endured even since the Spaniard left for Ferrari, and it worked well as the duo propelled McLaren to third position in last year’s Constructors’ Championship.

But even though, like Norris, Ricciardo is one of F1’s jokers, rarely without a smile on his face, it appears there is more tension in their relationship than was expected to be the case.

Herbert, writing in Motor Sport Magazine, thinks that is no bad thing for Norris, who has stamped his authority on the Australian this year by scoring a hugely impressive 113 of the team’s 163 points, putting him third in the Drivers’ standings while his colleague has struggled to adapt to his new car.

“Lando Norris is my choice for driver of the first half-season in Formula 1 this year,” said the two-time grand prix winner.

“There is a wonderful maturity starting to appear in him, a maturity we didn’t see in the past couple of years when he was teamed with Carlos Sainz at McLaren.

“Now he is with Daniel Ricciardo there’s been a mental change because they are not friends. Lando doesn’t want to be a friend and that’s the right attitude to have. You have to be cut-throat at some point.

“Lando was so friendly, bubbly and chatty when he first came into F1 and he still is. But has has something now that wasn’t there before.”

However, as well as the mental side, it is what Norris has been doing on track that has impressed Herbert, with three podium finishes this season and a couple of challenges for pole position on merit.

“He’s delivering the goods consistently,” added the Sky F1 pundit. “He’s up against Daniel and yet it’s Lando who is getting the best from the car and in the first half of the season there has been a massive shift for everyone to see.

“Lewis Hamilton was full of praise for him after Austria and when you hear that from your fellow drivers, especially a seven-time World Champion, you take it on board and feel good about yourself.

“You relax, knowing your performance is there and you stop having to think about it. When he’s battling with the likes of Lewis he shows good racing skills.”