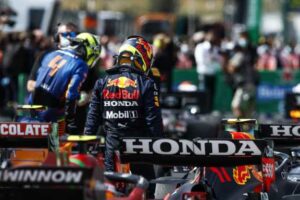 Lando Norris jokingly said “it’s about time” as Sergio Perez overtook him in the Drivers’ Championship with victory in Baku.

The Briton has been a real stand-out of the 2021 campaign, finishing no lower than P8 in the opening six races and collecting a pair of podium finishes.

After his P3 in Monaco, Norris was flying high, a fantastic P3 in the Drivers’ standings behind only Max Verstappen and Lewis Hamilton.

Of course, Norris’ new home of P4 after Baku remains a solid position, but it was “about time” Perez overtook him anyway.

“It’s about time,” he said with a smile when reporters asked about him being overtaken by Perez.

“But that doesn’t matter. It’s about time he overtook me so congrats to him, his first win with Red Bull.

“They’re a lot quicker, so it’s expected. I’m not disappointed I lost P3 in the Championship but from my side, I was happy with the weekend.

“A few mistakes from my side on Saturday and a couple in the race, but apart from that a good job.”

Formula 1 now prepares for a triple-header, starting with the French Grand Prix on June 20 which will precede back-to-back rounds in Austria.

After that, it will be time for the British Grand Prix, and also the debut of sprint qualifying which will replace the traditional format on a Saturday.

Baku gave us a sneak preview of what this 100-kilometre sprint race could be like after the drivers contested the final two laps from a standing restart. The race had been red-flagged when then leader Verstappen suffered a tyre failure and hit the wall down the main straight.

That two-lap battle in Baku was very enjoyable for the viewer, and it was the same from Norris’ perspective.

“It feels quite different to a normal start because you have a lot more grip with the soft tyres and very low fuel, so you can be quite a bit more attacking,” he explained.

“It’s a bit more enjoyable in that way and we gained two positions with Hamilton going straight on and getting past [Yuki] Tsunoda.”