Home » Lando Norris 'up there' in potential World Champion class

Lando Norris 'up there' in potential World Champion class 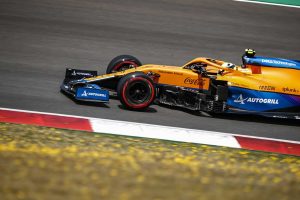 There is plenty of praise for McLaren driver Lando Norris following another strong performance at the Portuguese Grand Prix.

Norris made it three races on the spin with a top five finish to his name and has already collected 37 points so far this season. A clear improvement on the eight points and 26 points he collected at the same respective stages during his first two Formula 1 campaigns.

While he is not letting the good form distract him from the bigger picture, the media cannot stop talking about the man who has arguably been the most impressive driver so far this season.

So much so, that Sky Italy’s Marc Gene has put Norris in an elite class of current Formula 1 drivers.

“For me in this moment he’s right up there with Hamilton, Verstappen and Leclerc,” Gene said when talking about Norris.

“He has driven three great races and he was perfect both in qualifying and in the race [this weekend].

Hamilton, Verstappen, Norris and Leclerc are already drivers that have the potential to be champions [in future], obviously Hamilton already is but I’ve no doubts that Norris is already in this group.”

Three races in, top five finish in all of them. 🙌

Ferrari tried to battle with Norris at the Portuguese Grand Prix but it ultimately ended up costing them a double-points finish as Carlos Sainz slipped down to a P11 result.

And Gene, who still retains his Ferrari links in a test driver role, says Sainz would have scored points with ease had Ferrari not pushed the button too early with their undercut attempt on Norris.

“If we had put him on the hard tyres, he would have finished in the points zone for sure,” Gene continued.

“But it’s easy to say in hindsight. He was one of the first to make the pit stop and his race was against Norris, so to do the undercut he could not put the hard tyres on. The surprise for us was how much we struggled with the medium tyres.”

“Charles [Leclerc] did a good race. He had Norris’ pace, like in Imola, where he was there with Norris, with the same pace.

“We just have to understand what happened with Carlos, the long run on Friday was not that bad with the medium tyres, otherwise we wouldn’t have made this choice.

“We have to understand why the performance with the medium tyres was much below expectations.”

Also performing below expectations in Gene’s eyes, was ex-Ferrari driver Kimi Raikkonen, who caused an early Safety Car and an early race retirement for himself after a clumsy collision with team-mate Antonio Giovinazzi.

When asked which driver disappointed him the most, he said: “Kimi, because of his mistake. We always expect a lot from him, but that was a big mistake.”