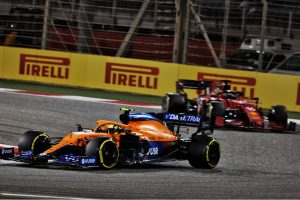 Lando Norris admitted he had been secretly hoping during the Bahrain Grand Prix that Mercedes might gift him another season-opening podium finish.

In 2020, the British driver gained his only top-three result in F1 so far, taking third position in Austria after Lewis Hamilton incurred a five-second penalty for a collision with Alex Albon.

Bahrain’s 2021 curtain-raiser was dominated by last year’s regular podium trio of Hamilton, Max Verstappen and Valtteri Bottas – but Norris was hoping at one stage he might get to gatecrash the party.

The McLaren driver, who ended up fourth, knew Bottas was encountering difficulties at a pit-stop when his front right-tyre got stuck – and he thought that might open the door for him.

“I was hoping that was him out of the race, to be honest,” said Norris, before quickly taking a more magnanimous stance.

“I don’t wish that upon anyone, obviously. I thought for a minute something might have been coming from it – last year started to flash back a little bit, but very happy with P4.

“I think we had good pace, the car was nice and I was maintaining a good gap. It’s a good start to the season.

“Mercedes and Red Bull pulled away a lot but I passed the Ferrari [Charles Leclerc] cleanly on track on pure pace. We’ve got work to do, but for a first race I think we can be very happy with today.”

Norris’ team-mate, Daniel Ricciardo, finished seventh on his McLaren debut and feels he has “plenty to work on” before he can feel fully comfortable with the car.

“I think the weekend as a whole, pretty satisfied,” the Australian told Sky F1. “In the race I struggled with pace, I wouldn’t say it was a strong race by any means, but plenty to work on and learn from. Definitely not discouraged but still some work to do.

“As the race went on I felt like I was falling back and back and just struggled to push on the tyres.

“There’s some finessing I can do with the car and find what sweet spot I’m after in the set-up. A lot of homework for me to do to keep getting better. I made plenty of notes through the race of where the car was holding me back. I think seventh is a poor race, call it like that.”

However, Ricciardo thinks he will be able to make swifter progress than he did with Renault, whom he joined in 2019.

“This feels like very familiar territory from two years ago, but even then I felt still quite deflated after race two,” he added.

“I felt I still had a lot to learn with the new car at Renault. Here, I don’t feel as off the mark as much and I feel this process will be faster.”