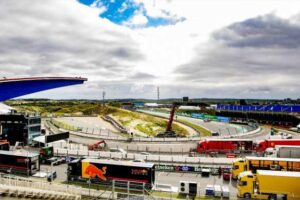 A repeat of last Sunday’s washout when F1 returns to the Netherlands after 36 years looks – thankfully – extremely unlikely for the Dutch Grand Prix.

Rain had been forecast for all three days in Belgium and duly materialised, but nobody could have predicted how devastating an effect Sunday’s downpour would have on the race.

Not a single racing lap was completed and the fans that lined the circuit, with last year’s grand prix having been staged behind closed doors, were left to head home soaked and once again denied any live action.

Fortunately, it looks a very different picture for Zandvoort, the coastal town around 20 miles from Amsterdam which stages Formula 1 for the first time since 1985.

The orange-clad army of Max Verstappen fans are unlikely to even need a rain jacket judging by the latest weather forecast, with the light showers that had earlier been predicted for Sunday now having seemingly moved away.

According to the BBC, practice day on Friday looks like being bright with sunny intervals and a moderate breeze, a highest temperature of 19 degrees and a negligible chance of rain.

It is a similar story for qualifying on Saturday, although perhaps a degree or two cooler.

Then on Sunday, which will come as a big relief to all after last weekend’s miserable scenario, the fans may well need to remember their sun cream, shades and hats.

The cloud of the previous two days should give way to clear blue skies and temperatures topping 20 degrees – and best of all, with last Sunday all too fresh in the mind, a 0% chance of rain for the two hours that will, hopefully, encompass the timeframe of the grand prix.

The Dutch Grand Prix had to be cancelled when it was due to return to the Formula 1 calendar last season because of the global health pandemic.

This year, its place on the calendar was in doubt for a time because organisers maintained they needed a full crowd of 105,000 for the event to be financially viable.

Ultimately, the Dutch government would only allow two-thirds capacity of 70,000, but it goes ahead and is sure to still be a special first home grand prix for Verstappen – who would regain the World Championship lead from Lewis Hamilton if he could win it for Red Bull.