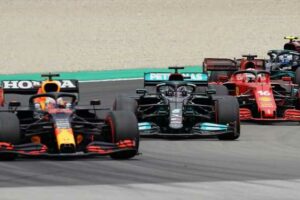 Give Charles Leclerc a choice between fighting Max Verstappen or Lewis Hamilton and he’ll take the former as it is “always really on the limit”.

Although Leclerc doesn’t often get to race wheel-to-wheel with Verstappen or Hamilton, Ferrari off the pace of the Red Bull and Mercedes, he was up against Hamilton as recently as this year’s British Grand Prix, a battle – and a win – that he lost to the Mercedes driver.

In previous years he’s also fought Verstappen, the two thrilling with a wheel-banging tussle at the 2019 Austrian GP, which Verstappen won. Two weeks later they again wheel-to-wheel at the British GP, that time Leclerc came out on top.

But while the Monégasque driver isn’t involved in Verstappen and Hamilton’s fight, on the track or in the standings, he has had the opportunity to watch them go tooth-and-nail for track position, and ultimately race wins.

He reckons it is two contrasting driving styles, but enjoys Verstappen’s the most.

“Lewis is always very, very clever in the way he positions his car to put you in a difficult situation. And he most of the time manages to make the pass in a clean way.

“Max is a little bit more aggressive,” he continued.

“But I enjoy racing with both, and if anything I quite like fighting with Max because it’s always really on the limit.”

Like many, the Ferrari driver doesn’t believe for a moment that Verstappen and Hamilton’s Italian Grand Prix is the last that Formula 1 has seen this season.

The title protagonists collided at mid-way through the Monza race, both in the gravel and out of the grand prix.

It was their second big crash of this season, and it won’t be their last, says Leclerc.

“We also don’t give much margin whenever I’ve got Lando [Norris] or one of the McLarens with me.

“It’s the same for them fighting for the championship, if not even more.

“It wouldn’t surprise me.”