Lewis Hamilton and Max Verstappen together in France press conference 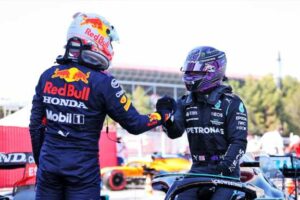 Max Verstappen and Lewis Hamilton will face the media together in the press conferences ahead of the French Grand Prix.

The two main World Championship challengers will speak together on Thursday with the pairs having been announced for the drivers’ pre-race media obligations.

With only a four-point difference between the pair and a dramatic race in Baku now digested, there will be plenty to talk about. But after a scoreless race for both drivers last time out, the two are still well clear of the rest of the chasing pack in the Drivers’ Championship.

Elsewhere, an all-Finnish media call will take place with Kimi Raikkonen and Valtteri Bottas, as well as both Alpine drivers being paired up ahead of the team’s home race.

The top two from the previous race in Azerbaijan, Sergio Perez and Sebastian Vettel, will also be interviewed together as they look to follow up their success from Baku.

As ever, we will have you fully covered on PlanetF1.com for the biggest stories to come out of those interviews before the race – and the headlines are likely to be dominated by the Red Bull and Mercedes protagonists.

(Pairs listed in order of appearance)