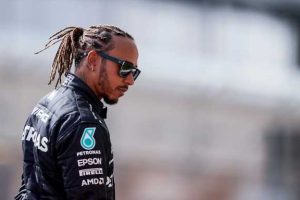 Lewis Hamilton could be back living in the UK in the coming years, the Brit renovating an £18 million home in west London.

Born in Stevenage, Hamilton joined the Formula 1 fraternity and it wasn’t long before he was saying farewell to England to relocated to Switzerland.

The move was criticised by his detractors with his father, and then manager, Anthony Hamilton saying at the time that it was “my idea”.

He added: “I always said to Lewis that, if he started to make any money, he would have to move abroad. It could be a very short career – we just don’t know – and you have to take care of what you have got.”

Hamilton subsequently moved to Monaco in 2012 having declared that life in Switzerland was a “bit boring” and that he “fancied a change”.

Turns out for Hamilton it would be a long career in Formula 1 with the seven-time World Champion entering his 15th season in the sport.

Also a well-paid career with the 36-year-old the sport’s top earner.

But with 2021 potentially his last season in Formula 1, the Brit having signed only a one-year deal to continue with Mercedes, Hamilton is looking to the future.

That future could be in England, and could “maybe” include “a family” for the Brit.

Hamilton is busy renovating an £18million home in west London that he bought in 2017.

He has never lived there, though, choosing to remain in Monaco.

LH, you're up 👌 Can't wait to share this footage with you guys! pic.twitter.com/txLdpL6itD

He told The Sun: “Currently, I have no plans on changing where I live. I live in a dream place that all the other drivers live in too, in Monaco.

“I do have a home in England, which I am really excited to be finished, so when I do come to England I finally have an anchor.

“A place to call my own, rather than staying in hotels, which is never particularly enjoyable considering I do that a lot throughout the year.

“I think it is the start of something great and a place I will naturally have my family come to and maybe, in the future, have a family.”