"Lewis Hamilton is too preoccupied with nonsense than with real racing" 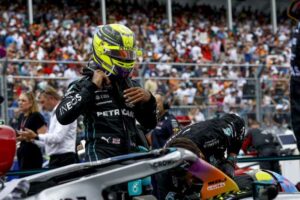 Mercedes and Lewis Hamilton are not in a happy space at the moment, with the latter looking for “excuses” as to why he is being “punched in the nose” by George Russell.

Mercedes’ W13 is not an easy car to drive and that is putting it politely, yet Russell has managed a run of top-five results.

The new Mercedes driver is the only racer on this year’s grid to have finished all five races in the top five, with his seven-time former World Champion team-mate only managing to do so on two occasions.

After eight years of fighting for the World title, it is a very different story for Hamilton who at Imola was not even able to score a point such was his woeful pace.

That race weekend saw what appeared to be a heated exchange between himself and Toto Wolff, while on Sunday the Briton lambasted the team when asked to weigh in on his strategy, saying that is the pit wall’s job, not his.

The cracks are, according to Coronel, growing.

"There was no disagreement at all"

Toto Wolff clears up the frustrations he and Lewis Hamilton had after a difficult qualifying in Imola 👇 pic.twitter.com/KkU2tJFNRh

“Mercedes and Hamilton are not on a good vibe,” he told the Dutch edition of Motorsport.com.

“As a driver, in a warm environment you express yourself well and then you can be creative and keep going.

“Hamilton and Mercedes are definitely not in that at the moment. I see Hamilton making a lot of excuses.”

But the 50-year-old adds that the seven-time former World Champion’s life is not being made easier as he “keeps getting punched in the nose from his team-mate Russell.

“Then you go to the wrong momentum and you see that happening with Hamilton now. He’s looking for excuses.”

Hamilton has only beaten Russell once this season, the 37-year-old finishing ahead at the season-opening Bahrain Grand Prix. That was also Hamilton’s only podium of the campaign.

Asked about Hamilton’s decision not to play a role in deciding his strategy, whereas Russell made the call to stay out that ultimately earned him fifth place, Coronel said: “Russell takes chances because he feels pretty good. He creates that. We used to see that with [Michael] Schumacher, who really thought along with the team.

“Now Hamilton puts the ball to the team, but as a driver you also have to think. Hamilton is too preoccupied with his piercings, gems and other nonsense than with real racing.”

But while the Dutch racing driver is not happy with Hamilton, he is impressed with how Russell is getting the most from the bouncing W13.

But having driven a “chicken coop of a car” at Williams, he has had experience with bad cars.

“He comes from the same line as Norris, Max and Leclerc, let’s face it,” he added. “It is a group that have known each other from an early age and who have always fought each other. It’s about how do you develop during that year?

“Russell has had to drive a chicken coop of a car for the past few years [at Williams], let’s get that straight. He had to learn to adapt to the car and get the most out of it. And he does.”