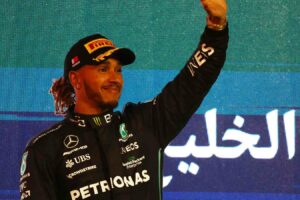 Lewis Hamilton said Mercedes’ third and fourth-placed finishes in Bahrain were “pretty remarkable” given their pace deficit compared to Red Bull and Ferrari.

Hamilton and his team-mate George Russell were running a distant P5 and P6 through most of the Bahrain Grand Prix, in which Charles Leclerc eventually led home a Ferrari 1-2 after Max Verstappen and Sergio Perez had retired with engine issues late on.

A haul of 27 points came Mercedes’ way as a result, with Hamilton getting himself onto the podium in place of the Red Bulls as a reward for his efforts.

But he is well aware the car is lagging behind the front-runners at the moment, with team principal Toto Wolff admitting the team were “punching above our weight class” in finishing where they did.

Lewis: “Wooooo. Let’s go. Let’s go. Thank you so much for the hard work. I appreciate it.”

A long way to go still. But just the starting point we needed.

We keep pushing from here! 💪 pic.twitter.com/bPKlbGfjUc

“Oh for sure, we definitely wouldn’t have expected it,” Hamilton said to Sky Sports F1 after the race. “I woke up this morning hoping we would have a chance to fight, have a car that’s better than we think maybe, or something like that.

“We did struggle in the race, but George did a great job. To get a third and a fourth I think is pretty remarkable given the problems we have.”

The seven-time former World Champion admitted the team “haven’t figured out” where their struggles are in terms of engine power, but also that the W13 is struggling in several areas with the top two teams having run comfortably ahead of the reigning Constructors’ champions throughout the race.

He thinks there are areas of positivity within the car but still plenty to be done before they can compete with Red Bull and Ferrari on a level playing field.

“The thing is with our car, we have a car that’s bouncing a lot everywhere,” said Hamilton. “It’s not just in a straight line, and we have [a] very poor rear end through all the lower-speed corners and all the medium-speed corners.

“The only place it’s generally quite good is in relatively high [speed], and then we are very slow in a straight line.

“I don’t know if it’s drag or power, we haven’t figured that out yet, but the others we can’t keep up with – even with DRS.

“So we have a lot of work, and what that means is you are just sliding a lot on the rear, then the tyres just get hotter and hotter and degrade, so that’s where we’ve got a lot of work to try and catch up on.”