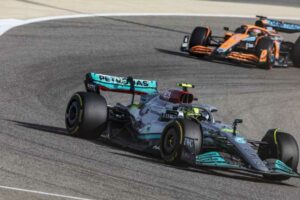 That meant the seven-time former World Champion was behind not only his former team-mate Valtteri Bottas, who is now with Alfa Romeo, but also Mick Schumacher in the Haas – the team that consistently filled the back row of the grid last season.

However, it is, of course, all change in 2022 due to the much-changed regulations and Mercedes are certainly not in their customary position at the top of the timesheets with the W13.

The car looked a handful during testing last week when Hamilton said he did not see the eight-time Constructors’ champions being contenders for race wins in the short term.

Among the worst examples of ‘porpoising’ along the straights, that issue was in evidence again in free practice and the more is seen of the W13, the less likely it appears Mercedes are ‘sandbagging’ and hiding the car’s true performance.

George jumps to P3 after his Soft tyre run. 👌

Lewis slots into P10. He’s losing time down the main straight with a malfunctioning DRS. pic.twitter.com/KLZgR2KnZB

Certainly from his comments after FP2, it seemed Hamilton thought a second-row start for Sunday’s season-opening race would be an achievement as Red Bull’s Max Verstappen and Ferrari duo Charles Leclerc and Carlos Sainz set the pace ahead of his new team-mate, George Russell.

“We’ve had small problems in the past, relatively compared to this year,” said Hamilton during an interview with Formula 1.

“We’ve had much, much smaller problems. We are faced with much, much bigger problems this year, and everything we do to try and kind of fix it doesn’t really change that.

“It appears it will be a more longer-term fix, so nothing in the short term.”

Hamilton had been on the team radio during the evening session complaining of the car “pulling” and elaborated on what he had experienced.

“Basically my front two [brake] discs, the left one was a much lower temperature and the right one would come up, and I couldn’t get the balance,” said the 37-year-old Briton.

“Then it meant you didn’t get the laps and it wasn’t great, but it’s not a major issue. The braking thing is something we can fix, so it’s not a concern.

“It’s more the balance and this bouncing we have and the loss of downforce we generally have compared to others is making it much, much harder out there.”

Again insisting there had be no attempt to hoodwink anyone, Hamilton added: “As you can see, we are a long way off. We are not bluffing like people assumed we were. We will work as hard as we can through it and do what we can.

“We can’t really do anything – this is the car. I can try and improve the set-up but that’s not the issue.

“I’m just realistic – we won’t be in the race for a win here. If you look at Red Bull they are a long way ahead. It’s in the region of eight or nine tenths ahead of us and Ferrari are something like five or six tenths ahead of us, so we are fighting and scrapping with whoever is behind them.”