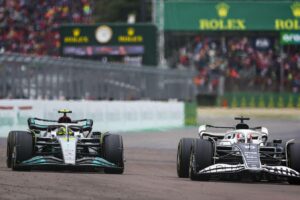 Lewis Hamilton says there is “no question” he is out of the 2022 World Championship picture after finishing a lowly 13th in the Emilia Romagna Grand Prix.

A dismal first season for Mercedes with the new generation of F1 cars and for Hamilton in particular sunk to a new low during a damp Imola weekend.

Only 13th with the W13 in qualifying and 14th in the sprint, the seven-time former World Champion was able to improve only one position on his grid spot in the grand prix.

After a compressed pit-stop phase between laps 18 and 20, Hamilton found himself stuck behind Pierre Gasly’s AlphaTauri, both before and after DRS was enabled, and despite multiple attempts to pass at the Tamburello chicane he was unable to do so.

LAP 38: Frustrating for Lewis, in the DRS train behind ALB and GAS. Keep pushing, LH! 💪

That came after a flawed stop when the Briton was stationary for almost five seconds, and meant he was almost squeezed into the pit-lane wall by Esteban Ocon who was released unsafely by Alpine.

Being lapped by winner and 2021 championship rival Max Verstappen compounded the misery, along with finishing nine places behind his team-mate George Russell.

With no points added to his total on a weekend when a maximum of 34 were available to each driver, Hamilton is now 58 behind World Championship leader Charles Leclerc and down to seventh position in the standings.

The 37-year-old had said after the sprint he felt he no longer had any chance of securing a record-breaking eighth world title this year, and following the grand prix at Imola he insisted there was absolutely no doubt about that.

“A weekend to forget, that’s for sure,” said Hamilton in his post-race interview with Sky F1.

“I’m out of the championship, for sure. There’s no question about that. But I’ll still keep working as hard as I can and try to pull it back together somehow.”

Asked if an earlier pit-stop might have helped, in the sense it would have pushed him ahead of some rivals and up towards the points, Hamilton said: “I really don’t know, I don’t think it would have made much of a difference.”

Although Hamilton and team principal Toto Wolff had been seen involved in a heated exchange in the Mercedes garage on Friday, there was a more cordial conversation between the duo over team radio at the end of the race.

“Lewis, hi, sorry for what you have needed to drive today. I know this is undriveable and not what we deserved to score as a result,” said Wolff. “So we’ll move from there, but this was a terrible race.”