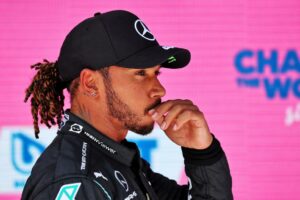 Lewis Hamilton has appealed to his Mercedes team for the W12 to be upgraded – but fears his plea will fall on deaf ears.

The seven-time World Champion has dropped 18 points behind Max Verstappen in the Drivers’ standings after three victories in four races for the Dutchman – who would have won all of those but for crashing out of the Azerbaijan Grand Prix in the closing stages due to a tyre failure.

The swing in momentum towards Red Bull is almost certainly being influenced by Mercedes putting their development resources into the all-new 2022 car, with team principal Toto Wolff saying the long-term benefits outweigh those that are achievable this year.

But Hamilton is more focused on the present and rather than lose any more ground to Verstappen, he has called for his car to be updated to ensure he stays in the hunt for a record-breaking eighth individual F1 title.

P2 and fastest lap for LH on Sunday! 👊 #StyrianGP pic.twitter.com/sUauGpjvQL

Asked after finishing a distant second to Verstappen in the Styrian Grand Prix whether it was the right or wrong decision for Mercedes to stop upgrading the W12 car, the Briton said: “I won’t question the team’s logic and how they got through with their process.

“I would love to have…give us an upgrade. We would love an upgrade, but I don’t think it’s in the pipeline at the moment.

“We are down on a few areas. It was close at the beginning of the season and if we both – Red Bull and us – had the same performance as we did in those first four races then perhaps it would be a little more exciting.

“They have taken a decent step forwards and we will work as hard as we can to manoeuvre around it, but in terms of baseline performance this is what we’ve got.”

Asked if he would like more focus on the 2021 car, Hamilton replied: “Look, I’ve got an incredibly intelligent, strong and amazing group of people working behind me who take all of those decisions.

“Obviously you have to try to balance out with this new cost-cap. Naturally, we would love to have upgrades and improvements but I don’t think that’s currently on the cards.”

Hamilton knows exactly the area where Mercedes are suffering – and it is a surprising one considering their domination of the sport since 2014.

“Straight-line speed,” was what he highlighted. “Whether that’s power or wing, it feels draggy but it also feels not that strong on the straights. It could be one or the other or both together.”