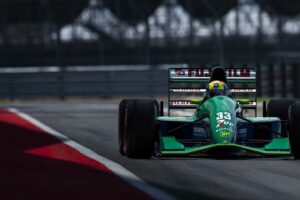 Mick Schumacher gathered a taste of the machine in which his illustrious father, seven-time Formula 1 champion Michael, made his Formula 1 debut, during a brief demonstration run at Silverstone on Tuesday.

Schumacher, 22, drove a green-liveried Jordan 191, which was the car used by his father at the 1991 Belgian Grand Prix.

The demonstration was part of a TV feature, filmed by U.K. broadcaster Sky Sports F1, which will be shown at next month’s Belgian Grand Prix to mark 30 years since Michael Schumacher made his Formula 1 debut.

Michael Schumacher was famously drafted in for his Formula 1 debut at Spa Francorchamps in 1991 with Jordan—then in its first season in the championship—and qualified seventh, though retired due to a clutch failure.

It was Schumacher’s sole appearance for Jordan, as he moved to Benetton for the next race, where he remained through 1995, taking the first two of his seven world titles. Schumacher went on to start 306 races, enjoying most of his success during an 11-year stay with Ferrari, prior to concluding his career at Mercedes in 2012.

Michael has not been seen in public since suffering serious injuries in a skiing accident in December 2013.

Mick has previously demonstrated his father’s title-winning Formula 1 machinery on a handful of occasions at Grands Prix. He got behind the wheel of the 1994 Benetton B194 at Spa Francorchamps in 2017, drove the 2004 Ferrari F2004 at Hockenheim in 2019, and again at Mugello last year, as part of Ferrari’s 1,000th Grand Prix celebrations.

The younger Schumacher, who is supported by Ferrari, stepped up to Formula 1 for 2021 with the Haas F1 Team, off the back of titles in Formula 2 (2020) and Formula 3 (2018). He has yet to challenge for the top 10, owing to the limitations of Haas’ VF-21, which has not been developed this season amid the team’s focus on the new-for-2022 regulations.

Schumacher has nonetheless reached the finish of the first 10 Grands Prix he has started in his career His best finish thus far was 13th at the F1 Azerbaijan Grand Prix at Baku.