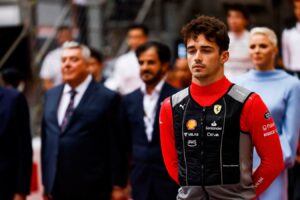 Sky F1 broadcaster Martin Brundle believes the relationship between Ferrari and Charles Leclerc is being “severely tested” after recent disappointments.

Leclerc, who took pole for both the Spanish and Monaco Grands Prix, retired from the lead while comfortably leading in Barcelona, before a poor Ferrari strategy saw him plummet from first down to fourth as the team pitted him twice in three laps.

Aside from a late error at the Emilia Romagna Grand Prix, Leclerc hasn’t put a wheel wrong but has seen his once-46 point lead evaporate to become a nine-point deficit after Monaco.

Having done all the hard work of taking pole position in Monaco qualifying, before easing away from the pack early in the race, Brundle said he can see the relationship becoming somewhat strained as a result of the team’s errors.

“You must feel sorry for local boy Charles Leclerc,” Brundle wrote in his post-race column for Sky F1.

“He aced pole position and comfortably led the race, only for strategy to consign him to fourth place.

“Pitting on lap 18 for intermediates, then again three laps later for slicks with a confused radio message meaning he had to wait briefly for his teammate Carlos Sainz to receive his slicks in a double-stacked pit stop. Therefore, he was initially undercut by [Sergio] Perez into second place and then delayed into fourth by the second stop.

“The mutual admiration and affection between Leclerc and Ferrari remind me of the relationship Michael Schumacher had with the team, but that has been severely tested on Leclerc’s side in eight days of two missed glorious victories and wasting the opportunity to regain the lead of the world championship.”

Fellow Sky F1 broadcaster Damon Hill also spoke about Leclerc’s reaction to the disappointment of Monaco, where the Monegasque driver criticised the team for making “too many mistakes”.

Hill opined that Leclerc should tread carefully in how vocal he is about criticising the Scuderia.

Leclerc is on a long-term deal with Ferrari, which will see him stay with the Maranello-based team until the end of 2026.