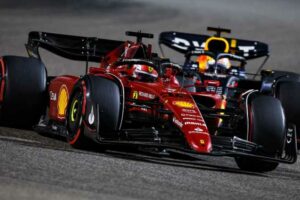 Verstappen and Leclerc delivered a thrilling tussle over the lead at the Bahrain season-opener after their first stops, the pair trading P1 back and forth for several laps.

It was done though, as Brundle pointed out, in a fair and less aggressive manner, especially if compared to how Verstappen and Hamilton went about their battles over the 2021 Drivers’ Championship.

In his Sky F1 column, Brundle wrote: “It was very interesting to observe those two slugging it out.

“Max would slice up the inside into turn one having used the slipstream, DRS rear wing open, and superior straight-line speed to remarkable effect down the pit straight, along with late braking.

“Charles was measuring this constantly in his mirrors, accepting the inevitable, and then intelligently ensuring he was second car past the DRS detection point, meaning he could get the rear wing open on the way up to turn four and regain the lead.

“Verstappen’s defence was firm but very fair, and with significantly less aggression than he dished out to Hamilton last season.

“Indeed, it was Leclerc who sliced across his nose into turn four on one occasion. It will be fascinating to see how this plays out as the championship unfolds.”

Verstappen would be forced to drop back after this battle to cool his brakes, but it was the main aim of these new regulations to allow drivers to follow more closely and overtake without losing downforce or ruining their tyres.

And based on how Verstappen and Leclerc were able to stay right up to each other and pull off that sequence of moves, it suggests that Formula 1 has been successful in this mission.

“As Ross Brawn’s engineering mind puts it ‘we only have a sample of one so far’, but it was clear from the testing and particularly racing in Bahrain that the drivers can follow each other more closely and without experiencing anywhere near as much unpredictable sliding followed by overheating of their tyres,” Brundle added.

“The cars remain very heavily aero loaded, of considerable girth, and extremely fast, and so they’ll never trade paint and places with each other like a hoard of Minis or Formula Fords, but that’s fine so long as we can experience the attack and counter-attack we witnessed between Charles Leclerc and Max Verstappen over three laps on Sunday night.”