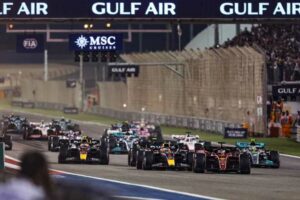 Martin Brundle thinks a 25-race Formula 1 calendar is inevitable – but it would be an “extreme” challenge for anyone present at every grand prix.

F1 is aiming to complete a record schedule of 23 races this year, which looks like coming to fruition once a replacement for the cancelled Sochi round in September is finalised.

A second Qatar Grand Prix, following last season’s debut at the Losail International Circuit, is the hot favourite to get the nod before that country joins the calendar on a long-term deal next year.

But with demand high to stage races, Brundle is expecting 25 grands prix to comprise future campaigns with Las Vegas and South Africa reported to be the next cabs off the rank – and that is without factoring in China, which has dropped off the roster since the pandemic took a grip in 2020 but is eager to return.

F1 CEO Stefano Domenicali has said there is such interest that 30 grands prix would be possible, but Brundle does not believe there would be any appetite for that number within the sport’s inner circle.

“There’s no doubt we are going to 25 races a season, which is extreme,” said Brundle, speaking to Sky Sports from Silverstone rather than Jeddah having been given the Saudi Arabian Grand Prix weekend off from his co-commentating and punditry duties.

“I don’t think we will go to 30. I think the point he (Domenicali) was making was we could go to 30 races as there’s that much interest. Formula 1 is going stratospheric at the moment, so I think he was just making the point ‘we could easily do 25 – if I want to, I could do 30’.

“The regulations limit it to 24 at the moment but I’m sure the teams will all agree if there’s more money to be had and more racing to be had, they will go to 25.

“Las Vegas will come on stream, Qatar comes on stream again next year and I know a lot of other countries are pushing like crazy. Those that have a grand prix are renewing as fast as they can and others want to join the party.

“I think we are relentlessly going to 25 which creates a lot of challenges, especially for those that have to do all of them.

“I’m not in Saudi Arabia this weekend because I’m here at Silverstone on a lovely track day on probably our one spring day of the year.”