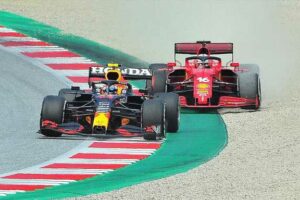 Mattia Binotto has no doubts Ferrari can take P3 in the standings ahead of McLaren if they work hard, and work as a team.

After a poor 2020 campaign, the Italian team have made good progress this year and are locked in a tight battle with McLaren for the third spot in the Constructors’ Championship.

They currently trail the British team by 15 points and have generally been less consistent in terms of pace in the first 10 rounds.

Binotto recently claimed winning that fight was not the priority for the team and that being ready for 2022 was more important.

Nevertheless, he says it is still a goal for the team and has no doubts his crew are capable of succeeding if they perform to the best of their abilities.

“It’s clear that – I said it even before the season – this team can take the third place. They always did that in previous years, except for 2020. They always finished also often second,” he told Sky Italia.

“So it’s our ambition. There’s no doubt we absolutely want to finish third, but our goal even before finishing third is to improve in every aspect, as a team.

“We are doing that, we saw that in the race pace, and I think third position is just the foregone conclusion of hard work.”

Ahhhhhhhh, incredibly close. I gave absolutely everything to win this race but lost out in the last two laps. The biggest victory today though is to see Max safe after that big crash. Now on to Hungary, thank you for the support ❤️ pic.twitter.com/PmoGwkdc3R

They gained ground on McLaren at the British Grand Prix thanks to Charles Leclerc’s P2 finish, and he was not far off winning the race.

After taking the lead at the start as Max Verstappen and Lewis Hamilton clashed, most expected him to be quickly caught and passed by both Mercedes drivers but that was not the case, with Leclerc staying ahead of Bottas and only being overtaken by Hamilton with a few laps remaining.

Despite that though, Binotto does not think his team’s car is as quick as the Mercedes.

“I don’t think [we were] equal because Hamilton, looking at the data, was saving the tyres in that moment, he was managing also maybe the risk of a blister on that kind of compound,” said the Italian.

“It’s true [we finished] ahead of Bottas. But I think we saw this in Austria with Norris on Bottas, who starts ahead and can do the pace is fundamental.

“So [it shows] the importance of the qualifying and the position on the grid to find yourself ahead and not stuck.”