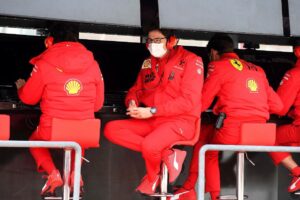 In what should have been a day of celebration, a report emerged from a former Ferrari insider that all was not well inside the paddock.

The insider claimed that Charles Leclerc’s side of the garage refused to attend the podium ceremony and missed the following photo shoot after being angry with the way the team had handled him during the race.

The Monégasque saw the win slip through his fingers as Ferrari first failed to allow him to pass Sainz despite being the quicker of the two drivers before then not pitting him during the Safety Car period meaning he slipped from holding the lead to P4.

In response to the report, Binotto said he was “surprised” and that it was something he personally checked on to see how true the statements were.

“That was not true,” Binotto told Autosport.

“When I heard or I read it, [I was] surprised. What I did was to check, because you never know, maybe there is something that I missed. But I checked and that was not the case at all.

“[I’m] surprised and once again disappointed to read that sometimes, there are things that are written which do not correctly say what was happening.

“Yes, the team was not fully, fully happy at the time because we lost an opportunity after the Safety Car. But very happy for Carlos, who won his first race ever, in Silverstone he did a fantastic weekend starting from pole and then the race itself.

“The entire team was there cheering on Carlos. So, no issues there.”

“It is a shame to see all of this type of things because it is definitely not what is happening inside the team,” the 24-year-old told Sky Sports F1. “We are a very united team, we’ve always been and it’s not these difficult races that will make a change.

“Actually, I think half of the team that stayed on [for the] picture missed the plane to go back home and it was quite tricky.”

If we want the full details of it, we wanted to do a first picture first but Carlos was not here. So we had to delay everything.

“But no there’s no hard feelings or whatsoever, of course there’s disappointment because of my side I can only be disappointing obviously leading the race and and finishing fourth. But everybody was very, very happy for Carlos and this is the feeling that there is inside the team.”