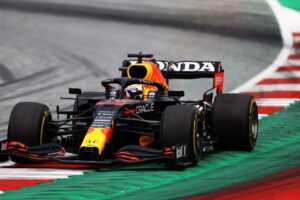 Orange is the new black in Formula 1.

In what is no longer a trend and now a bona fide run of dominance, Verstappen scored his first career Formula 1 Grand Slam at the Red Bull Ring in Spielberg, Austria, on Sunday. He started on the pole, led every lap and scored the fastest lap of the race in winning the Formula 1 Austrian Grand Prix.

The win capped a tripleheader sweep for Verstappen, who left the at the Red Bull Ring in Spielberg with a 32-point lead—a cushion of more than one full race—over Hamilton in the championship with nine of 23 races in the books.

The win before 132,000 fans was the fifth of the season for Verstappen and fifth in a row for Red Bull over the black-liveried Mercedes cars. It was a capacity crowd that included Verstappen fans dressed in orange and many firing off orange smoke bombs throughout the race to celebrate their driver. Last week’s race in Austria was in front of limited attendance due to COVID-19 restrictions.

“It was insane today to see all the fans,” Verstappen said. “There was so much orange, it was just incredible. A great motivation as well.”

There was no holding off a hard-charging Lewis Hamilton—or anyone else for that matter—or tire drama late in the race in this one. Verstappen was simply dominant. The only passing Verstappen did on Sunday was the passing of backmarkers, as only eight challengers finished on the lead lap.

“I’m a bit amazed myself how today went,” Verstappen told Sky Sports. “I didn’t expect it to be like this. Incredible job by everyone to deliver something like this. Of course, when you go into the weekend and everyone sees you as the favorite, but it’s never easy to always deliver what we did today.”

Verstappen toyed with the field from the beginning, leading from lights out to finish. He was even able to make a second pit stop with 10 laps to go in a successful bid for fastest laps. Making one more pit stop than both runner-up Valtteri Bottas of Mercedes and third-place Lando Norris of McLaren, Verstappen still scored a comfortable margin of victory of 17.9 seconds over Bottas and 20 seconds over Norris.

“I knew if I could go fast lap one, I could do my own race,” said Verstappen who jumped ahead of surprise No. 2 qualifier Norris at the start with little trouble.

Lewis Hamilton, who started fourth, finished fourth, 46.4 seconds back. Verstappen came into Sunday’s race with an 18-point lead in driver standing and now has a commanding 32-point lead on seven-time champion.

Meanwhile, it was another tough outing for American-based Haas F1 Team on the Fourth of July. Mick Schumacher finished 18th and teammate Nikita Mazepin 19th. The only car further down the standings was that of Esteban Ocon, who went out of the race with damage after contact with the car driven by Antonio Giovinazzi on the first lap.

“We went on alternative strategies,” said Mazepin. “We went on two stops, which didn’t work. I think the drop off of the tires wasn’t as big as we were expecting, but it was the blue flags. You’re not able to keep up your pace because you have to stop more. It was a long afternoon.”

For Bottas, the podium was the 61st of his career to move him past Nelson Piquet for 10th on the all-time F1 list for most podiums. Hamilton tops that list with 171.