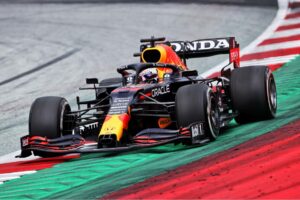 Max Verstappen has expanded on the braking issue he reported over the team radio on his way to victory in the Styrian Grand Prix.

There were very few moments of concern for the Dutchman during a race in which he was always in control, but one of them was a slight problem with the brake-by-wire system.

The Red Bull driver was told it was being caused by running over the kerbs at Turns 9 and 10, although he insisted he was not doing that.

Nevertheless, it did nothing to damage Verstappen’s prospects of winning the race as he coasted home with 35 seconds to spare over Lewis Hamilton – extending his advantage to 18 points in the Drivers’ World Championship standings.

Asked about the braking issue after the race, Verstappen, who has now won three of the last four grands prix, told reporters: “It [brake pedal] quickly just fell a bit to the floor between Turn 9 and Turn 10 while braking, and then it would come back after Turn 10.

“So we’ll look into that. But it happened two times I think.”

YEAH 💪 Our car was on fire 🔥 I enjoyed the drive, thank you, @redbullracing and @HondaRacingF1 🙏🏻 Another win at our home track feels really good 🏆 #StyrianGP 🇦🇹 pic.twitter.com/Z1lPXjw3C3

Red Bull team principal Christian Horner said on Sky F1: “I think we could see, it was what you call a bit of knock-off where you rattle over the kerbs, the feeling of the pedal goes long, and it must be a horrible feeling.

“But I think once he stayed off the kerb, that then managed – the system was much happier with that. It wasn’t too much of a drama.”

Horner also referred to the win, Red Bull’s fifth in eight races this year, as their “most dominant” and Verstappen said it showed how far his team had come since Mercedes’ last success at the Spanish Grand Prix in terms of tyre management.

“It’s all about making sure you have the tyres to the end,” said the 23-year-old.

“I do think in Barcelona we just didn’t have, a bit like I think it was today, they couldn’t keep up with me in terms of pace, and if you had that little bit extra of pace you can manage your lap times a bit more.

“That just helps these tyres a lot to the end because they are super-sensitive in terms of sliding, locking, whatever, it overheats super-quick. So it’s all about management at the end.”