Max Verstappen has a dig at Mercedes, dismal 'since 2017' 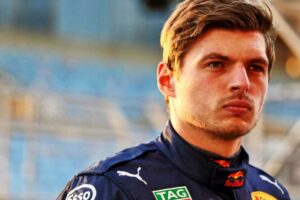 Max Verstappen says Mercedes will be “dead last” in Bahrain as they’ve had a dismal car “since 2017”, at least they say so in testing.

Mercedes did not have the pre-season they had planned, the Brackley squad said to be struggling more than the rest of the field with porpoising because of their zero-pods.

The design means there is not much holding the floor up so the porpoising experienced with this year’s ground effect aerodynamic cars is compounded.

This led Lewis Hamilton to declare that he doesn’t “think we will be competing for wins” while “Ferrari look quickest, then perhaps Red Bull and maybe McLaren. But we are currently not at the top”.

His team-mate George Russell added that the “performance isn’t there” and that Mercedes are “a step behind our rivals”.

Asked about Mercedes’ comments during Friday’s press conference, Verstappen had a go at his title rivals.

“I think they will be dead last!” he sarcastically said.

“According to their comments, I think they have an awful car. And they have that already since 2017 in pre-season testing.”

He added: “No, we’ll find out. I don’t know, but they for sure will be competitive.”

The Red Bull driver heads into this year’s championship as the defending World Champion having won the title with a last-lap-of-the-season pass on Hamilton in Abu Dhabi.

It was a controversial finish and one that refuses to die down as F1 awaits the FIA’s findings into now-sacked race director Michael Masi’s decision making.

There is some speculation that Formula 1 fears legal action when the findings are eventually published.

Verstappen though, insists he deserved that title.

“I proved that with the most wins, most pole laps and most laps led,” he said. “People forget that. They only look at Abu Dhabi apparently.”

Verstappen has previously shared his thoughts on his title success, the controversy and Mercedes’ complaints.

He told De Telegraaf: “At the end of the day, it was a crazy and epic Formula 1 season.

“The losing team will try to take the shine off it a bit. But on the winning side, it still feels good, I can assure you.”