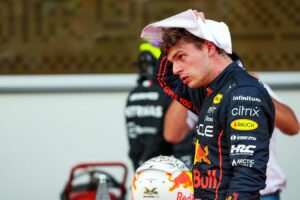 Max Verstappen has joked he hopes his P3 starting place is not an “unlucky spot” for him in the Azerbaijan Grand Prix.

The Red Bull driver started in the same place in Baku last season and took the lead of the race, then suffered a tyre blowout at almost 200mph late on that scuppered his chances of what was a likely comfortable race victory.

He will line up behind Charles Leclerc and his Red Bull team-mate Sergio Perez on the grid this Sunday, with team boss Christian Horner dubbing Perez ‘Mr Baku’ after his previous success in Azerbaijan – taking the win after Verstappen’s retirement in 2021, as well as two further podium finishes in midfield-running Force India cars.

The reigning World Champion, meanwhile, acknowledged he has not had his RB18 set up to his liking all weekend, missing out on a bit of performance that has separated him from his team-mate.

P2 ➕ P3 for the Bulls on Saturday 👏 All to play for tomorrow 👊 #AzerbaijanGP 🇦🇿 pic.twitter.com/uKEgwLTaOG

But despite that, the Baku City Circuit provides plenty of chances to overtake and he has not lost hope of a good race result.

“I started third also last year I think and it was also an unlucky spot. If you have the pace, it doesn’t matter – you will get to the front,” Verstappen told reporters after qualifying.

“But over one lap again it’s just lacking a bit of performance, just not having the balance how I would like and then on the street circuit, to really push you to the limit with full confidence and being consistent in what you do.

“It’s hard when you don’t have that balanced feeling in the car and that also I lacked today or the whole weekend, basically in general a bit.

“So it’s a bit of a shame. But I think tomorrow, everything will stabilise a bit in the race anyway in terms of how you attack and then hopefully as a team we can put pressure on Ferrari and hopefully take advantage of that.”

Perez was faster than Verstappen on the whole last time out in Monaco also, and the Dutchman added he has not quite had the same kind of feel his team-mate has found on street tracks, hoping that will balance itself out when Formula 1 returns to more traditional venues.

“It seems like so far all the time the street circuits have been a bit of an issue,” he said. “Maybe if we go to normal tracks we will be a bit better, but even there I’m not entirely happy so there’s still a bit of work to do.

“It’s still a very new car and there’s still a lot of races left where we can improve our balance. But there is definitely work to do.”