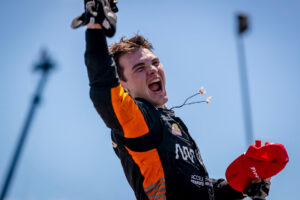 McLaren CEO Zak Brown has not ruled out a future involvement in Formula 1 for 22-year-old IndyCar prodigy Pato O’Ward.

The Mexican, who is currently P2 in the IndyCar standings after winning his second race of the season in Detroit a week ago – after starting P16 on the grid – drives for Arrow McLaren SP in the US-based series and has raised eyebrows with his performances behind the wheel of McLaren’s affiliated car.

O’Ward, who was the 2020 Indy 500 Rookie of the Year, won his first IndyCar race earlier in the season and, as a result, earned himself a place in the Formula 1 young driver test at the end of the year.

Brown promised him a drive in a Formula 1 car once he won a race in IndyCar, while the McLaren has also offered Daniel Ricciardo a go in Dale Earnhardt’s 1984 NASCAR challenger after he earns his first McLaren podium.

Compatriot Sergio Perez has said O’Ward can compete with the “very best” drivers and, while Brown is keeping his eyes firmly on an IndyCar future for the young driver, he is looking forward to seeing how he gets on in Abu Dhabi.

“He’s going to get his test at the end of the year,” Brown said at the French Grand Prix, quoted by The Race.

“Right now, keep him laser-focused on IndyCar… historically IndyCar comes down to the last race with about three, four or five drivers that can win so I want him to stay laser focus there.

“But I’m very impressed with him and let’s see how he gets on in the Abu Dhabi test and go from there.”

Maybe I was into drift cars in my past life🤣🧐pic.twitter.com/GLfwe6jqjU

His recent performances have also led the McLaren CEO to lavish him with a compliment, by comparing him to one of Formula 1’s most mercurial talents of the 2000s.

“He very much reminds me of a young Juan Pablo Montoya,” Brown enthused.

“It was an awesome drive [in his latest IndyCar win in Detroit]. He’s a huge talent. I think he’s very naturally gifted. He can hang the car out like saw Montoya do on ovals, which doesn’t seem to scare him.”