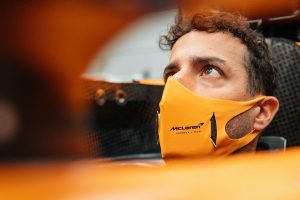 Daniel Ricciardo‘s first day at McLaren HQ has been documented online with a video of his seat fitting at the Woking base.

It’s the time of year now when drivers are starting to return to their teams in preparation for the new season, especially those who are joining new employers.

Ricciardo is one of several drivers to have switched allegiance ahead of the 2021 season, with the 31-year-old taking the place of Carlos Sainz to partner Lando Norris.

With a new team comes a whole lot of preparation including introductions to team members and, just as importantly, a seat fitting.

McLaren teased Formula 1 supporters via social media on Wednesday as they revealed pictures of Ricciardo taking a look around their headquarters, and on Thursday they revealed more footage of his day at the factory.

It did not take long for the former Renault driver to be taken aback by the facilities, which he compared to NASA – and he will certainly be hoping his MCL35M challenger gets him flying around the track.

He soon got into his driver’s suit, which was a bit of a tight fit, before taking his seat in the car which he will drive on track for the first time when pre-season testing takes place in Bahrain next month.

“Is this my seat? I can’t get in it,” Ricciardo laughed as he entered the car for the first time – perhaps not the ideal introduction to what will feel like his home for the next 10 months.

He was nonetheless excited at the sight of his new car though, saying: “I think the first time you see the new car at the start of any new year it’s pretty cool.”

The team around him were making adjustments there and then to try and get his seat exactly right, and Ricciardo was encouraged to tell them everything he felt needed to change as they stressed his comfort is their priority.

While in the car, the camera caught sight of the steering wheel too which displayed the words “END RACISM. D. Ricciardo 03. McLaren F1“. It is probably at a moment like that when the move to a new team truly sinks in.

Ricciardo continued to suggest what adjustments may need making, and it is perhaps no surprise he did not leave his sense of humour at home as he began emulating the noises of a racing car. Never change, Daniel.

Ricciardo will appear publicly in his new colours for the first time at the team launch on February 15.