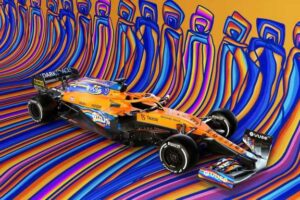 McLaren have unveiled a special Vuse livery which they’ll be using at the final round of the season in Abu Dhabi.

Vuse, one of the British team’s sponsors, is running a campaign called Driven By Change which aims to give platforms to up and coming artists over the age of 25 who lack recognition and representation.

As part of the initiative, UAE-based artist Rabab Tantawy has become the first female artist from the Middle East to design an F1 Livery, changing the look of the MCL35M for its final race.

“We are excited to bring the art and motorsport worlds together in a ground-breaking way, by sporting Rabab Tantawy’s artwork on our race cars at the Abu Dhabi Grand Prix,” said McLaren chief marketing officer Claire Cronin.

“Together with Vuse, Driven by Change is a unique opportunity to use our global stage to support rising talent, giving undiscovered creatives the platform they deserve.

“Rabab’s art is inspiring, and we are proud to take her papaya-influenced creation racing this weekend.”

Every angle of our striking #AbuDhabiGP livery. 🤩🇦🇪 #DrivenByChange pic.twitter.com/SqEY7b6Sjs

The livery retains the papaya and blue colour scheme that the car always features, but more shades and patterns have been added to the usually plain blue sections of the car.

It’s the second time this year that the livery has been changed, with the team also doing so for the Monaco Grand Prix, rocking a one-off Gulf-inspired design there that proved hugely popular.

They got on the podium that weekend courtesy of Lando Norris and will need both drivers to so in the season finale, finishing P1 and P2 as they did in Monza, if they want to take P3 in the Constructors’ Championship from Ferrari.