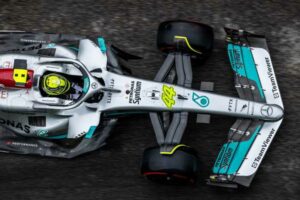 After Mercedes suffered a Q2 exit at Imola, Andy Shovlin is hoping for a better showing in Saturday afternoon’s sprint race.

Neither George Russell nor Lewis Hamilton had the pace to make it out of Q2 in qualifying for the Emilia Romagna Grand Prix with Hamilton only sneaking through into Q2 by 0.004s.

It was a difficult Friday for the Brackley squad, the team failing to make it into the final pole position shoot-out for the first time since the 2012 Japanese Grand Prix.

But all is not lost insists Shovlin.

“The problem is on a single lap, we seem to be very much in the midfield. It’s an area that we’re working on, but we don’t yet fully understand.”

Part of that problem is that the W13 struggles to get heat into its tyres.

“We’ve struggled with tyre warm up with this car to be honest, we’ve not got to the bottom of it,” Shovlin explained.

“Today was a painful example of that, where we couldn’t get the runs in that were long enough to build temperature to get the cars into the right window.

“We’ve seen it at all the races – at Bahrain it doesn’t really cost you. At all the other tracks it’s actually been a difficulty in qualifying.

“Before you could get the hot air from the brakes straight onto the rim and you get a very rapid transition of the heat there through into the bulk of the rubber.

“The regulations have been designed to make that difficult and they’ve succeeded. But we need to understand why we can’t match the midfield teams.

“We know Red Bull and Ferrari have got more downforce right now but we should be able to perform in the same position that we’re racing in, which is realistically the third quickest team.”

Russell will start Saturday’s sprint race P11 on the grid with Hamilton P13 with the race result determining the grid for Sunday’s Emilia Romagna Grand Prix.

Shovlin has all but ruled out his drivers putting in a performance like what Hamilton did at last year’s sprint race in Brazil when he shot up from P20 to P5.

“This is not a great track for overtaking,” he said, ” so we expect the rest of the weekend to be a challenge but we have shown that our race pace is better than our single lap and with both the sprint and the main race we have longer than normal to try and recover.”