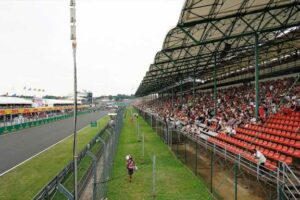 Between them, Mercedes, Ferrari and McLaren have provided Pirelli with over 500 laps worth of data for their new 18-inch tyres.

This is the final season when the current 13-inch wheels will be in use, with new 18-inch upgrades arriving for 2022 alongside the new generation of Formula 1 cars.

And following the Hungarian Grand Prix, the Hungaroring played host to the latest round of testing on these 18-inch wheels, and it was certainly a productive couple of days.

George Russell had been in action for Mercedes on the opening day on Tuesday, joined by Ferrari and McLaren, and on Wednesday it was the latter duo who remained at the Hungaroring for another day of data-gathering.

In action for McLaren was Daniel Ricciardo, with the Australian taking over from his team-mate, Lando Norris, for what was his first experience of the 18-inch tyres.

[email protected] completes its test programme with the #Fit4F1 2022 18-inch tyres at the @HungaroringF1. A total of 213 laps done by @LandoNorris and @danielricciardo over the two days and it’s time to start the summer holidays! @F1 @fia pic.twitter.com/yZbOe4jUnw

The Aussie completed 91 laps in a packed morning schedule, taking McLaren’s overall total to 213 laps when combined with Norris’ efforts.

And with that the chequered flag fell on this latest round of 18-inch tyre testing, a test that saw Mercedes, Ferrari and McLaren cover a combined 523 laps.

To put that into perspective, between them the trio covered the distance of more than seven grands prix.

All three teams now will enjoy a well-earned rest as Formula 1 enters its three-week summer break.

Upon returning for the Belgian Grand Prix at Spa-Francorchamps, Mercedes will be looking to defend their lead in the Constructors’ Championship, having overhauled Red Bull at the Hungarian Grand Prix.

Ferrari and McLaren, meanwhile, will resume their fierce battle over P3 in the Constructors’.

Literally nothing separates these iconic teams, both tied on 163 points heading into the Belgian GP.