Mercedes think Red Bull 'should be on pole everywhere' 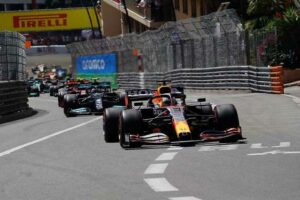 Mercedes continue to push the favourites’ tag down on their title rivals, with Toto Wolff saying Red Bull should be on pole at every race track in 2021.

Red Bull are emerging as serious title contenders to the team who have won World Championship doubles every year since 2014 and currently hold narrow leads in both World Championship standings following victory for Max Verstappen in Monaco.

Ever since pre-season testing, Mercedes has been pitching themselves as the underdogs in this ding-dong battle with Red Bull and Silver Arrows team principal, Wolff, took another opportunity to say this campaign is Red Bull’s to lose.

All 👀 on Baku… Back on track in one week, Team! 💪 pic.twitter.com/eNaBwoPHew

“Red Bull can’t deny being the favourite. That’s the reality.

“In Bahrain, Max should have won if Lewis hadn’t driven so incredibly. If he had waited another half lap before trying to overtake, he would have finished first.

“In Imola, Max made a mistake on the qualifying lap, otherwise he would have been in front. In Portugal, he drove over the track limit in qualifying and in the race and made a mistake when Lewis was breathing down his neck and was therefore able to overtake.”

And it is those mistakes that Verstappen can ill-afford to make when Hamilton is driving at the peak of his powers.

That being said, Wolff thinks Verstappen does have what it takes to become a World Champion this season.

“Yes, he can do it. However, he still makes small mistakes because he is young,” Wolff continued.

“His speed and driving control are excellent.

“But when you’re not allowed to make any mistakes at all because Lewis is driving at the height of his ability, then you add a new challenge that he doesn’t yet know in Formula 1.

“Being a chaser is much easier because of that. That’s why the situation suits us.”