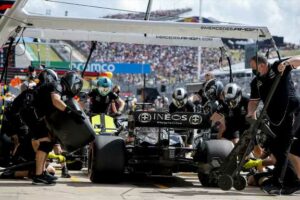 Mercedes believe it was not possible to pit Lewis Hamilton earlier than lap 14 at the start of the United States Grand Prix.

A very aggressive strategy from Red Bull ultimately paid off at the Circuit of The Americas as World Championship leader Max Verstappen held off his title rival in a tense finale.

Even though Hamilton grabbed the race lead following an amazing start out of the blocks from P2 on the grid, it was still Red Bull calling the first shots and forcing Hamilton and Mercedes to be reactive, rather than proactive, when it came to pit stop strategy.

As Hamilton ultimately went on to miss out on the top step of the podium, settling for P2, it has begged the question: why did Mercedes not pit Hamilton sooner?

Mercedes’ motorsport strategy director, James Vowles, has given a thorough explanation as to why an earlier stop simply was not possible.

We’re talking overcuts, undercuts, one-stop races, engine change penalties and much, much more with James in this week’s debrief! 👀

“First, we would have come out right on top of Ricciardo,” Vowles said in Mercedes post-Austin debrief.

“And we would have been compromised through the Esses until we got past past him probably on the run down to Turn 12 and that would have cost us time.

“Maybe not enough to not hold on to that lead position but it would have cost us time.

“The second is, Red Bull would have then gone very long, as we did, but they did have two cars so they didn’t have the pressure to then stop and they were fast on that first stint on Medium and that could have made us into a very compromised position later in the race.

“So, from our perspective we knew the early stop was good and we had highlighted that just the lap Ricciardo pulled out of our window, which probably would have been lap eleven, would be the right point but what Red Bull did was take a gamble.

“They didn’t mind if they had to convert to a three stop, ultimately Verstappen would have finished second anyway. That would have put us behind Perez.

“So, ultimately, it’s a balance between making sure your first stint is long enough, that you are not dropping off the tyre curve on stint two and stint three because a team that can go longer than you will ultimately beat you if they have car pace.”

Hamilton has left Austin with a 12-point deficit to overcome in the Drivers’ Championship heading into the next round at Mexico; Mercedes, meanwhile, have a 23-point lead in the Constructors’ race with five races left in the 2021 season.