Home » Mercedes 'under no illusions' about Red Bull's pace

Mercedes 'under no illusions' about Red Bull's pace 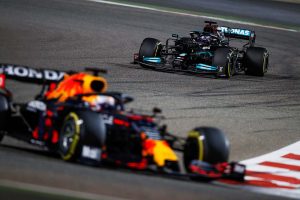 Despite winning round one of the season, Toto Wolff believes Mercedes’ W12 is “lacking pace” with Red Bull having the edge.

Last time out in Bahrain, Max Verstappen claimed pole position for Red Bull, 0.388sec up on Lewis Hamilton while Valtteri Bottas was third fastest in qualifying.

Hamilton fought back in the grand prix, using strategy and track position to take the victory by a mere 0.7sec ahead of his Red Bull rival.

It was a thrilling end to the grand prix with Verstappen catching Hamilton as the laps counted down before making a move at Turn 4 for the lead.

That was done off the track, with the Red Bull driver made to give the position back to Hamilton who held on for the win. Bottas was third.

But despite their double podium at the Sakhir circuit, Mercedes left Bahrain worried about Red Bull and fearing the Milton Keynes squad, with their high-rake RB16B, have a pace advantage.

Wolff, though, says he is thoroughly enjoying the competition.

“Hopefully the duel in the desert between us and Red Bull is a sign of what’s to come this year,” the Austrian said.

“We won the first round but we are under no illusions that this will be a straightforward season.

“The car is still lacking pace over a single lap and Red Bull appear to have the edge right now.

“We are pushing hard to close the gap and this is a challenge we relish.”

Rolling out for Imola ??❤️ pic.twitter.com/szOADirg3K

Formula 1 had a three-week break between Bahrain and the Emilia Romagna Grand Prix with pundits claiming the extended gap between race one and two may play to Mercedes, giving them time to work on their issues.

The teams now head to Imola, a circuit where Mercedes clinched a 1-2 in 2020 with Hamilton leading home Bottas.

Verstappen, who had chased down Bottas to run second, suffered a tyre failure that caused him to leave the track and become beached in the gravel trap at the Villeneuve chicane.

Wolff added: “We’ve been eager to get back on track over this three-week break and round two, the Emilia Romagna Grand Prix, is just around the corner.

“Imola is such a historic and iconic venue and a track the drivers really enjoy with its sweeping nature, high speeds and variety of corner types.

“It’s quite a narrow track, which makes overtaking more difficult, but this puts more focus on strategy and makes qualifying even more crucial.

“We all enjoyed returning to Imola in 2020 after a 14-year gap, and it was made more special by the fact we secured our seventh Constructors’ championship that weekend.

“We are looking forward to being back there again this weekend and seeing what the 2021 race has in store.”