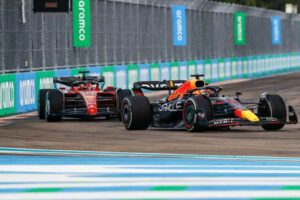 Ferrari had the advantage going into the race, Leclerc starting on pole with team-mate Carlos Sainz alongside him on the second row.

Verstappen made the pass on Sainz though at the start, and when told that Leclerc was starting to struggle with his front-right tyre, Verstappen began to reel in the lead Ferrari.

He would not need to wait long for the overtake, passing Leclerc down the inside at Turn 1 on Lap 9, a move which he said was the crucial foundation for that victory, making him the first-ever winner of the Miami Grand Prix.

Put to him that he looked in command during that race, Verstappen told Sky F1: “Yeah it was very good, I think especially in the start.

“I haven’t done a start at all this whole weekend because of all the troubles [in practice], so I didn’t know what to expect, I think we had a decent launch and I saw the opportunity to go around the outside [of Sainz] and it worked really well, we also gave each other space luckily.

“And then I was trying to hunt down Charles, I saw at one point he was struggling a bit with his right-front tyre and I went for it, so I could pass him and that actually really made the race because I could open up my gap, which then on the hard [tyre] stayed very similar, one lap he was a bit faster then I was faster again.”

There was one more hurdle to overcome though, that being the appearance of the Safety Car after Lando Norris and Pierre Gasly collided, much to Verstappen’s frustration.

Leclerc did look to challenge Verstappen’s lead after the restart, but Verstappen eventually pulled out of DRS range, winning the race by a margin of 3.8 seconds over Leclerc.

“That’s why I was not very happy when the Safety Car came out,” Verstappen continued.

“But these things happen in F1, those are the races that helped me in the past, so you cannot complain.

“At the restart we went for it again, initially I was struggling a bit with cold tyres, I just didn’t have the grip, but as soon as they came up to temperature then I think I could pull away a little bit.”

Verstappen reduced the deficit to Leclerc to 19 points with that win, but the experiences of his team-mate Sergio Perez were an unwelcome reminder of Red Bull’s main weakness so far this season.

Perez had a real opportunity to take Sainz’s spot on the podium, Red Bull team boss Christian Horner suggesting P2 was even possible, that was until a sensor problem caused Perez to lose power and drop back.

Verstappen of course has retired twice while running P2 this season. Every race he has finished, he has won it.

Mentioned to him that he would be leading the Championship without those retirements, Verstappen replied: “I know, we really need to be on top of that and try to do everything we can do.”