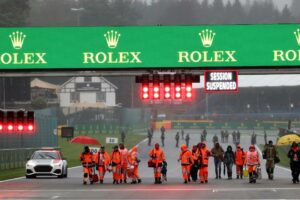 Michael Masi confirmed a Monday race was never a possibility after a farcical Belgian Grand Prix curtailed by rain.

Around three-and-three-quarter hours after it was due to begin, round 12 of the World Championship was declared over after two aborted attempts to get the race under way.

Rain had fallen on Spa-Francorchamps at various intervals throughout the weekend but was at its most prolonged on Sunday afternoon, leading to a 25-minute delay to the start of the grand prix.

After two laps behind the Safety Car, the race was red-flagged. There followed two-and-a-half hours of waiting around for a break in the weather and eventually another start was declared for 18:17 local time.

But the same thing happened, with visibility equally bad for the drivers if not worse, and after another red-flag stoppage a halt to everyone’s agony was called – with Max Verstappen declared the winner at the podium ceremony ahead of George Russell and Lewis Hamilton.

During the long break in between the ‘action’ – such as it was – the possibility was raised during TV coverage of the race being staged on Monday instead.

However, interviewed by Sky F1 afterwards, FIA race director Masi revealed that was never on the cards.

“There’s no ability to postpone the race to the following day,” said the Australian.

When asked why, he added: “The list would be pages long between the organisers, everyone here, all of us.”

It was also put to Masi whether the race could have been put back to later in the year, to which he replied: “I don’t know if that’s logistically a possibility to occur.”

There is bound to be criticism about how the procedure was handled, but Masi naturally defended his and the stewards’ position.

“From the FIA perspective and jointly with Formula 1, safety is paramount for drivers, the teams and all of the spectators,” he said.

“We gave every available opportunity within the rule book, in the provisions of the International Sporting Code, to give us the best opportunity to be able to complete a race.

“Unfortunately, on this occasion we could not go the full distance that was available, but the provisions in the ISC to stop the [race] clock was what we tried to do to see if we could get ourselves in a weather window of some activity.”

Masi added that he had been in continuous communication with the teams and sought advice from the drivers on what conditions were like behind the Safety Car.

“I was going with the teams. I asked all of the teams deliberately, particularly the first time around, to get the drivers’ feedback,” said Masi.

“During the formation lap, communication between the drivers and the team is not allowed but I asked them to ask all the drivers to give feedback.

“It’s obviously disappointing for everyone involved that we couldn’t get the full distance in, but at least we got something in.

“We’ve seen the worst of the weather today. The conditions have not been great all weekend but we’ve had patches where we could get activity done. Today I think the weather got a bit the better of us.”