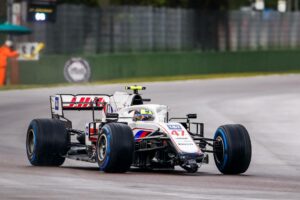 Mick Schumacher is happy with the start he has made to his rookie season as he has finished each race, which he feels is crucial.

The German has yet to come close to scoring points in his first season on the grid due to the fact that the Haas he is driving is the worst car on the grid.

Nevertheless, he has been widely praised for his performances so far as he has more often than not gotten the better of team-mate Nikita Mazepin and hasn’t made many mistakes.

The latter point is proven by the fact that he is one of just seven drivers yet to retire, and this makes him happy with how things have gone so far.

“Every kilometre of racing counts and enriches the experience,” he told speedweek.com.

“Of course, you can simulate a lot and practice in training, but the best driving experience is a Grand Prix. You can’t simulate the pressure in the race.

“So I’m happy with the season so far.”

A dramatic finish to a dramatic race 🏁

Nikita overtook Mick on the final lap but Schumacher finishes just ahead after a drag race to the line!

From a team perspective, the best race of the season thus far came last time out in Baku, with Schumacher and Mazepin in P13 and P14 and beating both Williams drivers, lifting Haas up to P9 ahead of the British team in the standings.

“We showed a good team performance in Azerbaijan,” said Schumacher about the weekend.

“We didn’t take it easy, but we worked our way forward and we can be satisfied with the result, especially with the move up to 9th place in the constructors’ championship.”

Next up on the calendar is the first triple-header of the season – with once race in France followed by two in Austria – and the first that the rookies will experience in Formula 1.

While he knows that it will be tough, Schumacher is excited about it, and thinks that he’s prepared.

He said: “It will be intense, but it will also be fun because we spend more time as a team and are constantly driving.

“Ultimately, racing is what we love to do best, so I don’t complain when one Grand Prix comes after another. Physically, I’m not worried anyway. I had prepared myself very seriously for the season.”