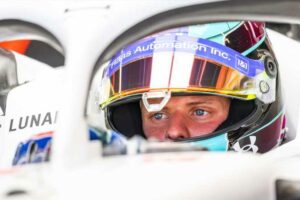 Haas are in a race against time to get Mick Schumacher’s car repaired for qualifying after the German suffered a rear right brake fire in final practice.

Pitting with flames coming from the rear of the car, the fire quickly took holding damaging the back right quarter of his VF-22.

When it comes to Lady Luck, Schumacher is not seeing much of her this season.

Yet to get off the mark, his troubles went from bad to worse in final practice for the Spanish Grand Prix when his rear right brake caught fire.

Mick’s had to return to the pits due to a fire on his right rear break. #HaasF1 #SpanishGP #FP3 pic.twitter.com/LEZwnGQKGH

He did so and as he tried to box, pretty much without brakes, his front jackman tried to take up his normal position only to fall over as the German went by.

Sky Sports’ Paul di Resta questioned: “Why is there a mechanic in front of a car that has got it brakes on fire?”

Karun Chandhok added: “That’s ridiculous, why would you have the front jackman there?”

Di Resta: “Somebody needs to take responsibility for that within the team. No brakes, you don’t stand in front of the car when it is about to stop in the box.”

The Haas mechanics were quickly up to the rear of his car armed with fire extinguishers and, as the fire took hold, the pit lane mechanics joined the fight.

The whole of the right rear corner was alight for more than a minute, the back right of the car wrecked by the flames with the brake shroud destroyed.

Haas will need to change the entire corner in order to get the German out on track for qualifying. The clock was counting down.

Pierre Gasly also made an early exit from FP3, out when a heat shield failed caused his AlphaTauri’s PU to overheat.