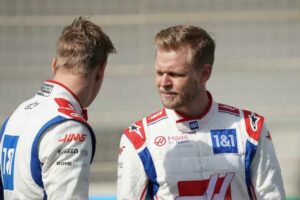 Mick Schumacher is not “intimidated” by new Haas team-mate Kevin Magnussen, confident in his own ability.

This season Schumacher has a new team-mate at Haas, the American outing bringing the experienced Magnussen back into fold after terminating Nikita Mazepin’s contract.

The Dane reminded the paddock of his credentials, P1 on his very first outing in the Haas VF-22, which just so happened to be his first run in a Formula 1 in more than a year.

Team boss Guenther Steiner hopes Magnussen can push Schumacher to the next level, saying if the German beats his experienced team-mate that will “mean something”.

Schumacher understands that challenge that awaits him, and insists he’s up for it.

“He [Magnussenn] was only out of Formula 1 for a year and before that he was there for a very long time,” Speedweek quotes him as having told Sky. “But I know where I stand and what I can do, so that doesn’t intimidate me.”

Magnussen was P1 on the penultimate day of testing with Schumacher P2 on the final day, both the Haas drivers setting their fastest lap times during the extra hours of testing late in the night.

Schumacher says that’s no indication of the pecking order as most of the teams did not throw off their sandbags. He also implied that Haas didn’t show their full potential either.

“Many teams have probably not yet shown their full performance,” he said, “but that doesn’t mean that we’ve already shown our full potential.”

His uncle Ralf Schumacher, a former F1 driver turned Sky pundit, says this is the season in which his nephew needs to show the world what he can do.

2022 is the 22-year-old’s second season in Formula 1, Schumacher having shown in the junior series that it is in his second season when he usually hits his stride.

“Mick must now implement what he has learned,” said Ralf. “The expectations are higher, including those that Mick has of himself. Now the power has to be called up. For Mick, it’s almost the next step in his career.

“Mick also has a new team-mate in Kevin Magnussen. That will be difficult for Mick, because people will expect him – he has to crack it.

“Magnussen is both an opportunity and a danger for Mick.

“Basically every team-mate is a threat because if your team-mate is faster than you then you have a problem. The opportunity for Mick is to be able to learn a lot from an experienced man.”