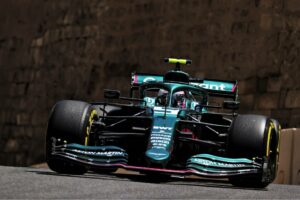 Sebastian Vettel said a combination of his own mistake and an untimely red flag cost him a Q3 appearance at the Azerbaijan Grand Prix.

The German had been hoping to follow up much his best weekend for Aston Martin in Monaco with another strong performance on a street circuit.

Vettel had qualified eighth in Monte Carlo and finished the race fifth, improving on what had been a poor start with the team he joined this year.

Now he will be hoping to move up the order again in Baku to score more points, for a red flag that ended Q2, caused by Daniel Ricciardo’s crash, prevented the 33-year-old from a second run during that session which could have allowed him to force his way into the top 10.

But at least Vettel will have the benefit of being able to choose the compound of tyres on which he starts the race – all of the top 10 will be on the softs – having missed out on the pole-position shootout by just 0.029sec.

Three hundredths of a second away from Q3.

But the points come tomorrow, and you know we'll give it everything. 👊 pic.twitter.com/sEm4fwDlpC

“I think that’s the standard phrase for anyone in P11…an advantage with free choice of tyres,” Vettel told reporters after qualifying.

“Disappointed because I had a mistake and it was up to me. I should have done better – I had a lock-up into Turn 15 and lost a lot of time, otherwise it would have been quite easy to [reach] Q3. Then there was the red flag.

“A tricky session with a lot of red flags and interruptions. We did get caught out in the end not having another go. My first go in Q2 was really good and I was really well under way, but then had the lock-up. It’s part of this track – it bites at times.”

One of the red flags, in Q1, was caused by Vettel’s team-mate, Lance Stroll, who suffered a similar fate to Antonio Giovinazzi, Ricciardo and Yuki Tsunoda during qualifying.

Stroll was the first driver to hit the wall and consequently have his session ended before he had even set a time, but despite the team’s tweet above he will start ahead of Giovinazzi’s Alfa Romeo in P19.

“Just a mistake – I went in a little too hot and locked the front right tyre,” said the Canadian.

“These things happen – I’ll just have to bounce back tomorrow.”