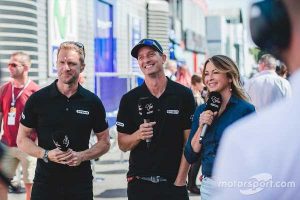 BT Sport has agreed a fresh three-year deal with Dorna Sports to continue exclusively broadcasting the MotoGP world champion in the UK through to 2024.

The subscription-based broadcaster took over from BBC as the UK’s live MotoGP broadcaster in 2014, moving the coverage away from free-to-air.

Since then BT has aired exclusive live coverage of MotoGP, as well as the Moto2 and Moto3 classes, with highlights packages produced by the network appearing on Channel 5 and Quest in the UK.

Though MotoGP may be without a British rider on the premier class grid for the first time since 2010, there was no suggestion coverage could go elsewhere, with BT announcing a new deal on Monday.

“We are extremely proud to continue as the home of MotoGP in the UK and Ireland,” Simon Green, BT Sport’s managing director said.

“BT Sport has the best presentation team delivering the most comprehensive MotoGP coverage that UK fans have ever enjoyed, with every single practice, qualifying and race broadcast in full.

“I would also like to congratulate Dorna on safely and successfully completing the 2020 season, one of the most exciting we have seen, and thank them for collaborating with us to bring some great new programming to our audiences during last year’s lockdown.”

“Fans in the UK and Ireland couldn’t ask for more.

“After a thrilling but challenging 2020 season, we are proud to see this partnership confirmed to continue and mark a decade of collaboration.

“We would also like to thank BT Sport for their support in 2020 and look forward to at least another four seasons working together.”

BT Sport’s latest deal will take ensure it has been the UK’s home for MotoGP for a decade come 2024.

It is unclear what free-to-air highlights alternative will be offered in 2021, while no details have been given on what BT’s on-air team will look like this year – though commentator Keith Heuwen announced last year he would be stepping back.

UK fans will also be able to watch live coverage of the 2021 MotoGP campaign via Dorna’s own world feed video pass.