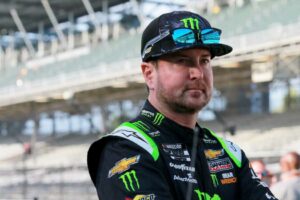 Another spot in the 2022 NASCAR Cup Series driver lineup has fallen into place.

In a late Friday announcement from Daytona International Speedway, the Toyota-based 23XI team confirmed that Kurt Busch will become Bubba Wallace’s teammate on the team co-owned by Denny Hamlin and Michael Jordan.

Busch will drive the No. 45 Toyota Camry, along with long-time sponsor Monster Energy. The 43-year-old Las Vegas, Nevada native is finishing his third season with Chip Ganassi Racing, which recently sold its assets to team co-owners Justin Marks and Pitbull at Trackhouse Racing. It’s been announced that Ross Chastain will move from CGR to the No. 1 Chevrolet at Trackhouse, joining Daniel Suarez, driver of the team’s No. 99 Chevrolet.

“I cannot begin to express my gratitude for this opportunity,” Busch said in a statement from the team. “Racing to win is what I live for. Helping to continue developing a new team, alongside Michael Jordan, Denny Hamlin, and Toyota is exactly what I want to be part of. Winning is important to 23XI, it’s important to Monster Energy, and it’s important to me. That is our goal.”

The Busch-to-23XI move had been a popular topic of speculation for several months. Wallace has struggled with the first-year team, with no poles, no victories, one top-5 finish, 13 finishes between 11th-20th, 10 more between 21st-30th, and a 39th. His average starting and finishing positions are almost identical: 19.4 to start and 19.8 to finish. He went into Saturday night’s Coke Zero Sugar 400 at Daytona ranked 21st in points, a long shot to make the 16-driver playoff field.

It’s been suggested that Busch was hired as much for his experience and potential to help Wallace as for what he can bring as a somewhat-aging driver. 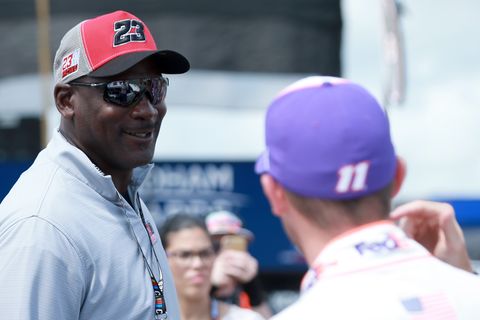 “When we started this team, our vision was to grow to a multi-car organization,” Hamlin said in a team statement. “To be able to expand in just our second year is a huge step for us. Kurt brings a wealth of knowledge and a championship mindset and will be able to help us grow stronger and more competitive.”

Busch, the 2004 Cup Series champion with Roush-Fenway Racing, has 33 career victories and will almost assuredly make the NASCAR Hall of Fame when he becomes eligible upon his retirement. He won the spring race at Atlanta Motor Speedway, a victory that qualified him for the upcoming playoffs. He’s won at least one race in each of the past eight seasons.

His resume shows his first 14 victories came with Jack Roush, his next 10 with Roger Penske, then six with Stewart-Haas, and the most recent three with Ganassi. He’s won at 17 tracks, and his victories include the 2017 Daytona 500.