Kevin Harvick’s march to 10 wins in a single NASCAR Cup Series season continued on Saturday night with a victory in the Bristol Night Race.

But it’s how he accomplished the feat that was most remarkable.

Slicing through lapped traffic, Harvick held off a hard-charging Kyle Busch, still seeking his first victory of the season — even trading the top spot inside the final 25 laps.

Busch hasn’t won since his triumph in the championship race last season at Homestead Miami Speedway and Bristol is arguably his best track.

“Just didn’t have enough,” Busch said upon climbing out of his car on pit road. “There was just no room for me to do what I need to do to get around him. Came up short—what can I say?”

Meanwhile, Harvick cemented his status as championship favorite after winning two of the first three races during the playoffs. He opened the Round of 16 with a victory in the Southern 500.

“To beat Kyle Busch at Bristol, I kind of got myself in a little bit of a ringer there,” said Harvick, who already had secured a berth in the Round of 12 with his win at Darlington in the Playoff opener. “I hit a lapped car and got a hole in the right-front nose, but just kept fighting. We don’t have anything else to lose.

“We were here to try to win a race. I know how much (crew chief) Rodney (Childers) really enjoys coming here and, hell, how can you not enjoy coming here with all this enthusiasm. Everybody is tired of being at home.”

Harvick’s previous career best was eight wins in 2018, and there are still seven races remaining this year. He would be the first driver since Jimmie Johnson in 2007 to reach 10 wins.

The last driver not from Hendrick Motorsports to reach at least 10 wins in a season was Rusty Wallace. He reached 10 in 1993 for Team Penske.

“It’s just been a weird a year,” Harvick said, “but it’s been an unbelievable year on the racetrack.”

Busch made it close at the end, driving deep into Turns 3 and 4 to initiate contact, but Harvick was too far gone. 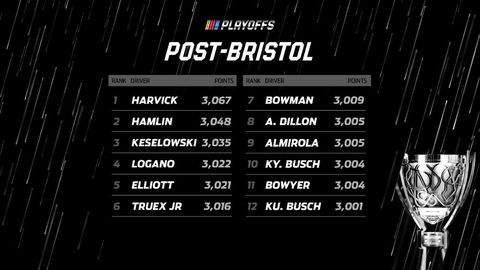 2. WHO ADVANCED IN THE PLAYOFFS?

Cole Custer, Matt DiBenedetto, Ryan Blaney and William Byron were eliminated at the conclusion of the Round of 16.

That means the Round of 12 will begin with the following standings:

The bottom four winless drivers in the standings after each round will be eliminated. Their points will be reset for the start of each round, adding whatever playoff points they accumulated during the previous round(s) to the base total.

The last remaining four will race for the championship in November at Phoenix Raceway.

The Round of 12 includes Las Vegas, Talladega and the Charlotte Roval.

The momentum from William Byron’s inaugural NASCAR Cup Series victory was short lived as he was eliminated from the playoffs one month later under frustrating circumstances in the Bristol Night Race.

Byron collided into the rear of Christopher Bell on Lap 232 of the 500-mile race when the slower car of Joey Gase (Rick Ware Racing No. 51) suddenly slowed in front of both young contenders.

Byron entered the night three points below the elimination cutline but finished eighth in the first stage to move to an even tie with Clint Bowyer for the final provisional transfer spot. But the contact with the Leavine Family Racing No. 95 destroyed the front of his Hendrick Motorsports No. 24.

Per NASCAR regulations, any car that goes behind the wall due to crash damage is retired from the race — eliminating Byron from advancing into the second round.

William Byron has been eliminated from #NASCARPlayoffs Round of 12 contention. He’s out of the race. Listen in to the No. 24 team’s radio. pic.twitter.com/P0vKtIPBey

“I had literally nowhere to go. You can’t stop in the middle of the straightaway,” Byron said. “I’ve got to go back and watch that because that was kind of ridiculous.”

Matt DiBenedetto and Ryan Blaney entered the Bristol Night Race facing a must-win scenario, but misfortune struck at every avenue.

DiBenedetto was 25 points out of a transfer spot and Blaney was 27.

That placed them both definitively in must-win mode over the remaining laps.

DiBenedetto was forced to pit on Lap 183 with a loose wheel, trapping him three laps down. He caught several well-timed cautions to get back on the lead lap via the waive-around and the free pass, but just didn’t have the speed to stay there.

Meanwhile, Blaney had to pit with a shredded right front with 140 laps to go, and remained several laps down throughout the second half.

For the second short track race in a row, the expectation of a traditional crashfest was thwarted by a largely procedural race in which only six drivers finished on the lead lap.

There was 183 lap stint that went caution free and included green flag pit stops. There were five cautions for 50 laps.

It’s the same tire combination that produced a race of the year candidate at Bristol in June, albeit under much cooler conditions.

END_OF_DOCUMENT_TOKEN_TO_BE_REPLACED

END_OF_DOCUMENT_TOKEN_TO_BE_REPLACED
We and our partners use cookies on this site to improve our service, perform analytics, personalize advertising, measure advertising performance, and remember website preferences.Ok