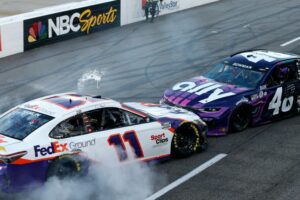 You could have gotten some pretty good odds that Team Penske would have qualified somebody into the Cup Series Championship 4 next weekend at Phoenix Raceway. Surely, either Joey Logano, Brad Keselowski, or Ryan Blaney would move on from Sunday’s great-at-the end Xfinity 500 at Martinsville Speedway.

Instead, it wasn’t even close. This time, the bizarre and spooky stayed home for most of Halloween afternoon. But when things turned sideways at the end, they went waaaaay sideways.

Kyle Larson, Chase Elliott, Denny Hamlin, and Martin Truex Jr. transferred through to next weekend’s 500-kilometer championship race. Larson and Elliott are Chevrolet teammates at Hendrick Motorsports; Hamlin and Truex Jr. are Toyota teammates at Joe Gibbs Racing. The Penske trio of Logano, Keselowski, and Blaney didn’t advance, neither did Toyota driver Kyle Busch, also of JGR. All four of them were respectable at time, but didn’t have quite enough to get it done when it mattered. 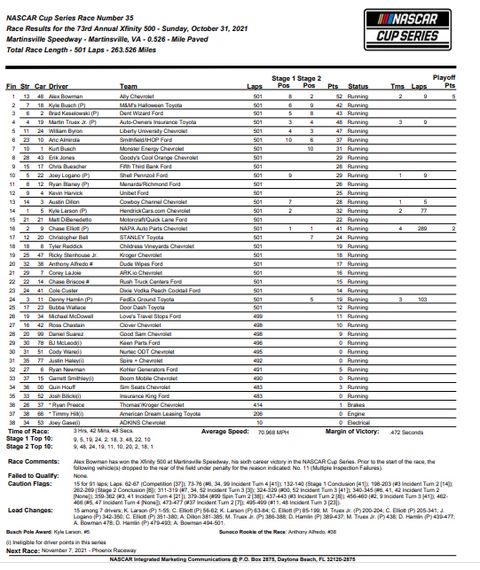 In effect, the entire 2021 season comes down to 312 laps at Phoenix next weekend. Stage points won’t matter for any of the final four drivers. The other 32 drivers on the grid don’t matter—except as they can impact the on-track scenario. The Championship 4 driver who beats the other three eligible contenders is this year’s champion. Regardless of where they finish, the champion is the guy who beats the other three.

Alex Bowman won the 500-lapper ahead of Kyle Busch, Keselowski, William Byron and Aric Almirola. The back-5 were Truex Jr., Kurt Busch, Eric Jones, Logano, and Chris Buescher. The season’s next-to-last race was contested in picture-perfect weather at the historic track in the foothills of Virginia’s south-central mountains. It was relatively calm and somewhat predictable much of the day, then turned spectacularly interesting toward the end. Within the final 75 laps, both the checkered flag and the last transfer spot were on the line.

Nine of the 16 cautions were jammed into the final 150 laps, and they involved contact among 14 cars.

Bowman took the checkered after spinning Hamlin—intentional? incidental contact? excuse me, coming through?—in Turns 3-4 with just a handful of laps remaining. It was a bitter pill for Hamlin, who rallied late and was poised to win after starting from the rear for two inspection failures. Later, he was sent to the rear for a mid-race pit road speeding penalty. He gamely climbed back toward the front, then eventually led seven times for 103 laps and was within sight of his sixth Martinsville victory before Bowman took him out.

“He’s just a hack, just an absolute hack,” Hamlin said of Bowman, another Hendrick Motorsports driver. “He gets his ass kicked by his teammates every week. He’s (expletive) terrible; he’s just terrible. He sees one opportunity, he takes it. He didn’t want to race us there. We had a good, clean race. I moved up as high as I could on the race track to give him all the room I could. He still can’t drive.”

Not unexpectedly, Bowman denied trying to take out Hamlin. They had been running a tight 1-2 for a handful of laps, so it wasn’t as if Bowman had no chance other than contact. “I just got loose in,” he said. “I got in too deep and knocked him out of the way … then literally let him have the lead back. (Hamlin was backward, up the track by then). I’d be mad, too. I get it.

“For anybody who wants to think I was trying to crash him, that’s not the case considering I literally gave up the lead to give it back to him. He’s been on the other side of that. He’s crashed guys here for wins. I hate that it happened. I just got in, got underneath him, and spun him out. The shoe has been on the other foot. Like, we’ve been on both sides of it.”

Kyle Busch, a two-time champion, missed making the Championship 4 by just three points. He said last week’s 28th-place finish at Kansas City was a serious setback. “We missed last week; that’s where we lost all the (points) ground,” he said. “I could have come in here with 15 more points and we would have been fine. It wasn’t meant to be; it was Truex’s day (to take the final spot). We had a Hail Mary opportunity and it didn’t materialize.”

As for not making it to the Championship 4: “Anytime you go into a season with Toyota, Joe Gibbs Racing, this 18 M&M’s team, and myself, you expect to be Championship 4, in contention, eligible,” he said. “Anything other than that is a failure. Guess we get an F.”

Keselowski also cited his difficult day at Kansas City last weekend as part of missing the transfer spot by eight points. “We got the car better (as he went along) and put ourselves in a position,” he said. “It just wasn’t quite strong enough at the end. Disappointing, but all in all we gave it a great run; we gave it our best. Wish I could have last week at Kansas back, that’s for sure. Felt like I left the eight points we were short there with some mistakes I made.”

Elliott and Larson dominated the first half of the race on the flat, tricky half-mile paperclip. They combined to lead all 130 laps of the fairly routine Stage 1. After that, Elliott and Truex Jr. shared the 130 laps in Stage 2. Stage 3 became something of a free-for-all. Hamlin led 93 of the last 103 laps; Bowman led eight of the last 9; Truex Jr., Logano, and Austin Dillon also led during that stage.

Other than Hamlin, Elliott probably had the most heartache. He had led four times for 289 laps and seemed almost untouchable until Keselowski touched him – literally, and hard, in Turn 4 on lap 456. Elliott spun and back up the track, and never recovered. He finished 16th, ahead of only 24th-place Hamlin among the eight Championship 4 drivers.