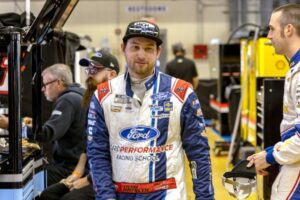 He did, however, earn the 2021 Cup series Rookie of the Year. It’s an award that’s familiar to him. Briscoe won the Rookie of the Year title in the Truck series (2017) and the Xfinity series (2019) and becomes only the third driver to win titles in all three of NASCAR’s top touring series joining William Byron and Erik Jones.

“I never thought I’d get to run one truck race, let alone a full season in all three series,” Briscoe said. “It’s very humbling to know that I was able to add my name to that list now.

“Hopefully this is the first of many years in the Cup series, but it was definitely a nice way to end the season it and nice to take some type of trophy on there.”

Briscoe’s name will not only join those of Byron and Jones, but legends and past Rookies of the Year such as past Richard Petty, David Pearson, Dale Earnhardt, and his boss Tony Stewart. Those legendary names come with legacies that will be hard for Briscoe to live up to, or equal. It will be up to him to find the sort of success those legends went on to have in the Cup series. He admits that for him to be successful, and create his own legacy, it will take perfection.

“I think that’s one thing I learned more than anything this year in my rookie season. There was, I would say five, six races where we had speed capable of running up inside the top three or five. And, you know, we just didn’t do all the little things right. And I didn’t do all the little things right. To be able to capitalize on that. And that’s the difference in running second or third versus running sixth or seventh in the Cup series.”

Moving forward Briscoe said he will focus on all those little things and minimizing his mistakes but will stay grounded.

“I don’t know what the key to success necessarily is,” he said. “I think all of us would love to know what that is. But I will say it’s not uncommon, I don’t think, to see guys struggle in the Cup series for the first couple of years. When you look at Chase Elliott who won the championship last year, it took him a hundred races until he won his first race. And Kyle Larson was Rookie of the Year in 2014, and now he’s a champion.

“I don’t know what the key to success necessarily is.”

“It takes a little while in the Cup series with how good everybody is, to kind of get your feet underneath you. We did have a lot of runs this year that show that we can do it at this level and show that we can run up front and battle for wins. It’s just doing that on a more consistent basis.”

While having three top-10 finishes all season might not be noteworthy, it could have been much worse, especially when measured against his Stewart-Haas teammates. In 2020 the organization won 11 races, nine of those belonging to Kevin Harvick.

This season the team had just one victory.

“You know, you base your expectations on the year before,” Briscoe said. “And that’s kinda where I think a lot of the frustration kind of comes from this year is we just didn’t, it didn’t meet our expectations, but at the same time, if you compare to our other teammates, you know, we had a pretty good year really.”

As for what happened to the team, it wasn’t that their focus was on the Next Gen car, and not on the current one.

“I wouldn’t say that we necessarily put all of our eggs in one basket on the Next Gen car,” Briscoe said. “I think for us, the biggest thing was just the rule changes that happened in the off season happened in a place where we were really pushing the limit.

“Once that got taken away, kind of our advantage got taken away. And I think that was almost a crutch for some of the other things that our cars had an issue with. “

Toward the middle of this season however, the team did start looking ahead to the Next Gen car, especially once the realization set in that they wouldn’t be making a deep playoff run. Aric Almirola and Harvick were the two SHR reps in the playoffs. Almirola was eliminated in the first round, Harvick in the second. And now SHR and Briscoe are looking towards next season with the development of the new car ongoing.

“Hopefully that’ll pay dividends now as we go to this Next Gen car,” he said. “But there’s so many unknowns with this car, it’s hard to say what team’s going to hit it right. But there is definitely going to be one team that that kinda gets the ball rolling quickly and whatever team does that is going to have quite the advantage for a while I think.”

The Next Gen car won’t be the only new thing the 2021 NASCAR Cup Rookie of the Year will have in 2022. Chase and wife Marissa welcomed Brooks Wayne Cunningham Briscoe into the world in October. The birth came just over a year removed from an emotional day in May of 2020 when Chase won the Xfinity race at Darlington holding off Kyle Busch. Due to COVID protocols Marrissa was home in North Carolina and the win came only a day after the couple shared the loss of a baby they hoped to welcome later that year.

A year removed from what would have been the birth of their first child, the Briscoes, who had been open about their struggles on social media, Chase will now look forward to racing his first full season as a father; and that may be the biggest motivation he needs to live up to the past legends inscribed on the Rookie of the Year trophy.

“I’ve heard people talk about whenever you have a kid you lose some (time) on the racetrack, but for me, I think it was the complete opposite,” he said. “It gives you even more of a reason to race. And you try to, at least for me, take more chances now because you’re trying to provide for him.

“It’s changed me for the good, honestly. I think that it’s been an incredible experience and something that, I don’t know if you’re ever ready for it, but for us it’s been a blast.”