Harvick: Drivers will need to be ‘extraordinary’ road racers 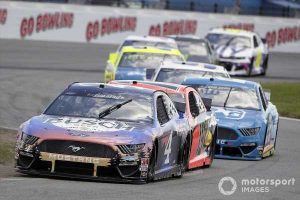 Kevin Harvick has been a vocal proponent of NASCAR changing up its schedule and by doing so this season he believes finding success in the sport will require versatile drivers.

NASCAR revamped its Cup Series schedule this season, eliminating some tracks while adding new ones and vastly increasing the number of road course races.

The Cup Series will compete on six road course events in its 26-race regular season this year – nearly a quarter of the races run to qualify for the season playoffs. One road course event – on the Charlotte Roval – will remain in the 10-race playoffs.

The Cup Series also is adding a race on dirt for the first time in more than 50 years, but road racing clearly will take a more prominent role in a series that has long been dominated by ovals.

“I think as you look at, I think you’re going to have to be very versatile. I think our sport is going to continue to change,” said Harvick, who won a series-high nine races in 2020 but none on a road course.

“I think you’re going to have to be an extraordinary road racer as you go into the next five years, just because of what you’re seeing this year and the opportunities of where you can race and the different race tracks and things that we can go to.”

In fact, the changes to the Cup Series schedule may have a larger impact, such as changing the development path of drivers that hope to reach NASCAR’s premier series.

“When you look at just a straight-up asphalt oval late model racer, I don’t know that that’s going to be 100 percent where you need to be,” Harvick said. “I think you definitely have to have that background, but I think being versatile and having that car control that is taught from a midget, sprint car standpoint (is important).

“You look at road racing and whether you can just get so many opportunities in so many different forms of racing at such a young age, I think it’s very important as you go forward to really consider how much time you spend on one craft.”

With COVID-19 pandemic protocols still in place to start the new season and a new car debuting in the series in 2022, Cup teams will have had little opportunity for development in the offseason.

That would appear to benefit the drivers who enjoyed much success last season – such as Harvick and Denny Hamlin, who combined to win 16 of the 36 points races.

Neither Harvick nor Hamlin won a road course event during the 2020 season. As it turned out, the series’ most prolific road racer of late, Chase Elliott, ended up winning the series championship by winning the season finale at Phoenix.

In fact, Elliott became the first series champion since 2017 to win a road course event on the way to capturing the title.

And other drivers who have enjoyed most of their success on more traditional ovals, will likely have to adapt or risk falling out of contention for wins and championships.