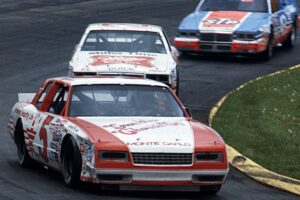 In the beginning, more than 37 years ago, there was Geoff, Harry, Martinsville, a church retreat, and Momma Hendrick. Together, they tell the story of Rick Hendrick’s first of 269 NASCAR Cup Series victories, the record he reached last weekend when Kyle Larson won the Coca-Cola 600 at Charlotte Motor Speedway.

But before that, there was Sunday, April 29, 1984 at Martinsville Speedway in southern Virginia, near where Hendrick was born and reared on a farm. He and his wife, Linda, were at a church retreat that day, spending time with their Lord rather than watching their team in the Sovran Bank 500.

That’s why they missed seeing driver Geoffrey Bodine and crew chief Harry Hyde give Hendrick the first of his 269 victories. (In defense, though, it’s unlikely the 35-year-old owner ever expected it to happen that day).

Bodine, in his 69th career start and eighth for his new owner, started sixth for the 500-lapper on the flat, demanding half-mile track. He stayed close all day, helped by 11 well-timed cautions that ate up 54 laps. He led laps 215-220 in his No. 5 Chevrolet (the same number Larson carried last weekend) and took the lead for good at lap 452. He won by six seconds over Ron Bouchard, with Darrell Waltrip, Bobby Allison, and Neil Bonnett third-through-fifth.

It’s an oft-told tale, how that victory saved the future superstar team from an early demise. Instead, Hendrick Motorsports now holds the record for all-time Cup victories, one more than Petty Enterprises’ 268, dating from Lee Petty’s first victory at Pittsburgh in 1949.

This is how Hendrick remembers that day in 1984 day that changed both his life and Bodine’s, and began setting a standard for motorsports excellence unsurpassed in this country.

“I remember going to the Daytona 500 that year, standing on the grid with teams like the Pettys, Junior Johnson, and Richard Childress,” Hendrick told Autoweek in the days preceding the Coca-Cola 600. “I looked around and thought, ‘What am I doing here?’ I honestly hoped to someday win one race. We had five full-time employees and 5,000 square feet of leased space, and I was just getting started in the car business. I ran the team out of my pocket, and could do that for only so long if we didn’t find a sponsor.

“I told (crew chief) Harry Hyde we couldn’t go past Darlington (two weeks before Martinsville) or I’d be putting my entire business at risk. We went to Darlington and finished 35th, and I thought that was it. Now, Harry was a great salesman. He kept saying, ‘Just let us go to Martinsville. Bodine is good there. We can win.’ He talked me into it. We won the race and ended up getting a sponsor because of it. The rest is history.”

But let’s back up a bit:

By the time Bodine got his first Cup victory and the first for Hendrick, he’d already established himself as one of racing’s best Modified and Sportsman drivers. In his younger day, in fact, he was always a factor in the biggest races in the Northeast and along the Eastern Seaboard. In 1978, the Guinness Book of Records credited him with 55 Modified victories in 84 starts, calling it a world record. Stats are sometimes twitchy, but it’s generally accepted that he won several hundred features before retiring in 2011 at age 62.

Those years of Modified and Sportsman success led to 61 Cup starts with several limited-budget teams between 1979 and 1983. Bodine ran most of 1982 (Rookie of the Year) and 1983 with veteran owner Cliff Stewart before moving to Hendrick, a former drag-boat racer who thought NASCAR would help promote his Chevrolet dealerships.

“Yeah, I guess you could say it was quite a gamble,” Bodine recently said. “I could have stayed with Cliff (and his No. 88 Gatorade Pontiac) more than just those two seasons. We did okay with Darryl Bryant as crew chief. We had some good runs (three poles, nine top-5s and 19 top-10s in 52 starts) and might have won some races if things had stopped breaking.

“At the time, Rick’s team didn’t have much except for Harry, a race-winning championship crew chief (1970 Cup with Bobby Isaac). I figured he could teach me how to win and I’d have a better chance there than with Cliff. But Rick was about to shut down that first year until Harry convinced him to go to Martinsville. He said the car and the engine were ready, and I was pretty good there. There was a lot of pressure, but thank goodness Harry talked Rick into it.”

Calling on his years of short-track experience, Bodine practiced and qualified well that weekend. “I was confident,” he said. “I had raced there in Modifieds and Sportsman (a combined seven victories), so I knew how to save brakes and keep the fenders on the car. It was important to save your stuff. Bobby led almost all day, but he wore his stuff out. I had a better-handling car at the end, and I drove around him on the outside of Turn 4 (at lap 452) and led the rest of the way.”

He spent the next four years—two each—with Junior Johnson and Bud Moore, then formed his own team from the remnants of the late Alan Kulwicki’s estate. The last of his 18 victories came with his own team with crew chief Paul Andrews at Watkins Glen in 1996. Bodine spent the final 12 years of his career (143 intermittent starts) with Cup, Xfinity, and Camping World owners who meant well, but didn’t have the resources of Hendrick, Johnson, and Moore.

• Rick couldn’t listen to the Martinsville broadcast, so he checked in with her during a break at church. “There were no cell phones back then,” he reminded. “I called her from a pay phone and asked about the race. She said, dead seriously, ‘You haven’t heard? He blew up.’ I thought it was all over. Then she said, ‘No, he won!’ I couldn’t believe it; I about dropped the phone. Then we went straight to Bodine’s house (near Greensboro) and covered his yard in toilet paper. It was such a relief to win. If we hadn’t, there’s no way we’d be here today.” 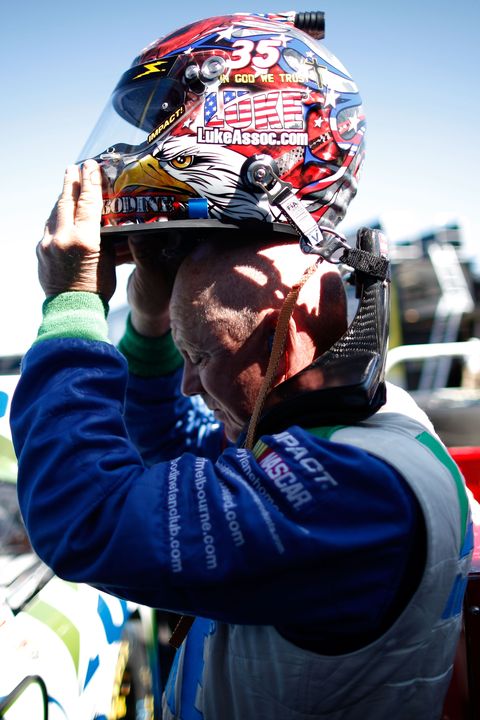 • Bodine’s 575 Cup starts between 1979-2011 produced 18 victories, 100 top-5s, and 190 top-10s. Among the victories were a Daytona 500, three road races, eight on short tracks, and six on longer speedways. He won seven times for Hendrick, four each for Johnson and himself, and three for Moore. He also won six Xfinity races, but none in the Truck Series, where he survived one of NASCAR’s all-time most spectacular accidents at Daytona Beach in 2000.

• He came into NASCAR as “Geoff,” and used that until the late 1990s when Jeff Burton, Jeff Gordon, and Jeff Green showed up. Bodine said he was switching to “Geoffrey” to avoid confusion. “When fans yelled ‘Geoff,’ I didn’t know who they wanted,” he explained. “My mother named me Geoffrey. So, if a fan said, ‘Jeff,’ I just kept walking. That saved a lot of embarrassment.”

• Bodine, now 72 and living in blissful retirement near Melbourne, Fla., is as proud of his support for the Team USA Olympic bobsled program as anything in racing. He was so angry that the 1992 team used European-designed sleds that he created the Bo-Dyn Bobsled Project that designed, built, and supported American-built sleds. It paid off when Team USA won three medals in 2002 and then a gold in 2010, the first Team USA gold in 62 years.