NASCAR Next Gen Safety at The Forefront after Crash Test 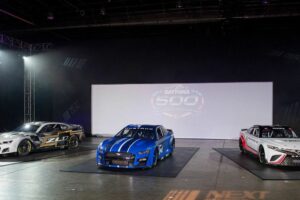 Even after a one-year delay resulting from the COVID-19 shutdown, the new platform is still behind schedule, and it may take a robust schedule of winter testing to get it ready for Daytona and the full season afterwards.

The safety elements of the upcoming car is currently under review by an independent panel of experts following an intentional crash test at Talladega Superspeedway on June 30.

The spec car was driven by a robot and fitted with a crash dummy — providing an opportunity to study how the dummy was affected by the impact.

This was actually the second attempt at a crash test, following one on June 23, when the sled failed and prevented NASCAR from sending the car into the wall.

During this process, tales of a dead crash dummy began circulating around the garage, accompanied by frustrated crew members who offered a shared narrative — that NASCAR wasn’t offering details or responding to questions about the status of the car.

Denny Hamlin, who is unique in his role as a driver-owner said on Sunday there is usually fire where there is smoke.

Drivers pushed for a meeting with the sanctioning body, and Kurt Busch personally met with NASCAR SVP of Innovation and Racing Development John Probst, who gave the 2004 champion a detailed report that ultimately concluded inconclusive.

“I didn’t expect that,” Busch said. “I was expecting some results. I was expecting data that showed positive or negative as far as the crash-absorbing material and how the driver dummy reacted.”

NASCAR indicated to race teams like week that the Next Gen showed “good and comparable performance” to right-front impacts juxtaposed against the current sixth generation car but was awaiting the completed review before commenting further.

“I feel like the car we’ve got, we’ve escaped some pretty good injuries from 99-percentile crashes,” Hamlin said. “While we definitely need to still work on some roof caving ins on the superspeedway stuff, generally when we blow a tire we know what we’re going to get. We’re going to get our bell rung a little bit, a little soreness here and there.”

While it’s standard operating procedure for an independent review board to review crashes or car development, this is part of what is being analyzed by the third part right now.

The data indicated that the car might have come in lighter and stiffer than it optimally needs to be, meaning that the driver could be susceptible to injury in high impact crashes without changes — as cars are intentionally designed to break apart to dissipate impact.

“Ultimately, we haven’t gotten the results back, Hamlin said. “I guess there’s rumors that start from people that are kind of close to it and it doesn’t sound great, but again there’s no hard data. I would assume if things went fantastic, we would have heard about it pretty soon.”

The tale of a dead crash dummy took a life of its own when Chase Briscoe confirmed that the narrative existed in the garage last week in a since deleted Reddit comment.

Ryan Blaney said he has shuffled through various conclusions as the narrative shifted since the Talladega crash test took place.

“I was told the crash test ‘failed,’ so I took that as, ‘Oh, they killed the dummy,'” Blaney said when asked about it on Sunday. “That’s not what happened. The sled malfunctioned and it literally wouldn’t go. So, when they said it ‘failed,’ the test failed — they didn’t even get to crash the car.”

In hindsight, NASCAR Vice President of Competition Scott Miller conceded that the sanctioning body should have better communicated with drivers, teams and the industry at large, while also expressing confidence that the test didn’t not immediately show any cause for concern.

“There’s a lot of fiction out there,” Miller said on SiriusXM NASCAR Radio on Tuesday afternoon. “What everyone has to realize is that our normal safety testing procedure at the laboratory, so to speak, the proving grounds where we typically set up our impacts and get the data. That was done differently because of COVID and because of the backlog at that facility.

“So, we went and did that test at Talladega, at a real race track. So, what everyone needs to understand is that when we were able to do that test or any testing that we do, there is (a lot of) data that comes off of that.

“As far as the time frame goes, it always takes a while to piece together a complete report of what we saw in a crash, so it’s not like anyone should have expected us to crash the car and look at a couple of graphs and say, ‘we’re done analyzing this data.’

“We see absolutely nothing in the data that is alarming, and I have no idea how all the rumors that started that it didn’t go well, because it did go well. So hopefully we can get that report out.”

Miller hopes ‘it shouldn’t be too much longer’ to get the report out once the independent review board has combed over it.

“Maybe we should have communicated that better up front, that if it wasn’t immediate, that it wasn’t good,” Miller said. “That’s how the rumor got started, so we should have told everyone not to expect a comprehensive report because it takes time.”

The car is absolutely behind schedule, as the industry expect testing to begin around this time earlier in the year. Hamlin says it’s taking longer due to the supply chain issues plaguing various industries right now.

That complicating factor also has some within the industry predicting that the car either will not race at all next year or will only race a partial schedule similar to the 2007 season that was split between using the Car of Tomorrow and the previous generation car.

“I don’t blame anyone for it being this far down the road,” Hamlin said. “Yeah, we wish there would have been testing well before now, but also, really other than these show cars, we really haven’t had a car built other than the wheelforce cars. It’s been pushed back because of COVID and there’s just a lot of obstacles that has come in the way of getting this thing down the road quicker.”

Some drivers have already expressed a heightened sense of concern about the safety elements of the car following an incident in March 2020 at Auto Club Speedway involving William Byron.

The G forces of Byron’s spin were on par with the tire failure impacts Denny Hamlin and Erik Jones endured during the 2020 Brickyard 400 — although Byron was traveling at a fraction of the impact velocity of those two incidents.

Hamlin says the drivers have told NASCAR that no part of the Next Gen should be less safe than the current generation race — that nothing should be compromised from a safety standpoint.

“If you start having a bunch of concussion injuries and broken bones, this thing can go downhill pretty quick,” Hamlin said. “I think they’ll be pretty smart in making sure that the data supports and it’s a car they feel comfortable putting themselves in for the drivers. They deserve to know what they’re getting strapped into and hopefully we don’t race it until it’s at least better than what we’ve got.”

Meanwhile, there’s a subset of drivers who aren’t as concerned about safety, pointing to the inherent dangers of driving a race car.

Christopher Bell is spending is week in Ohio driving a 410 Sprint Car, one of the least safe racing machines in motorsports, so any version of a NASCAR Stock Car is safer than what he spends his free time racing.

With that said, he’s still invested in the conversation.

“I’m probably not the right guy to ask,” Bell said. “I came from Sprint Car racing so anything we’re doing is a lot safer than what I used to do growing up. Obviously, it’s very important and I’m very thankful that NASCAR takes it as serious as they do, and I think they do a great job with it and I believe that they’re not going to put us out there in something that’s no safe. That’s not really a concern of mine.”

Martin Truex Jr. said he hasn’t wanted to add to the confusion by commenting on the topic, but hopes everyone asking gets the answers they’re looking for.

If those answers come back approved by the independent review board, Hamlin said he would feel comfortable with proceeding forward.

He’s not worried about being lied to either.

“There’s just too much liability out there for them to fudge numbers right? The numbers will come back when we crash at Daytona,” Hamlin said. “The moment we crash and everyone is like, man, that’s worse. That will confirm or deny the results that are proven. You’re not going to be able to fudge numbers, but I do trust them and I trust the doctors and whatever they recommend.”